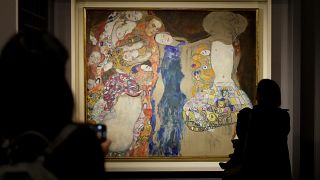 People admire Gustav Klimt's oil on canvas painting "The Bride" (1918) on display at the exhibition "Klimt. The Secession and Italy" at the Museum of Rome   -   Copyright  Andrew Medichini/AP
By Euronews  with AFP  •  Updated: 21/02/2022

Fifteen works, including paintings by Gustav Klimt and Marc Chagall, will be able to be returned to the heirs of Jewish families looted by the Nazis after the French parliament unanimously authorised the return on Tuesday evening.

After the National Assembly's unanimous vote on January 25, the Senate - dominated by the right - validated this text by a show of hands to the applause of these heirs or their representatives present in the gallery.

"This is a first step" because "spoiled works of art and books are still kept in public collections. Objects which ... should never have been there", said culture minister Roselyne Bachelot, while research on the provenance of the collections has accelerated.

It welcomes an "historic" law by which, for the first time in seventy years, "a government is taking steps to allow the restitution of works from public collections looted during the Second World War or acquired in troubled conditions during the Occupation, because of anti-Semitic persecutions".

A parliamentary bill was needed to override the principle of inalienability regarding public collections.

Senators from all sides welcomed restitutions going "in the direction of appeasement" and the "end of a too long process".

Senator Esther Benbassa, a historian specialising in the Jewish people, noted the importance of this vote "at a time when some are trying to rehabilitate the Vichy regime in the public debate", in reference to Eric Zemmour, candidate extreme right at the Elysée.

According to the rapporteur Béatrice Gosselin (LR), the spoliations were "one of the aspects of the policy of annihilation of the Jews of Europe led by the Nazi regime" and "without being the instigator, the Vichy regime also actively collaborated in these crimes".

Among the 15 works is "Rosiers under the trees" by Gustav Klimt, kept at the Musée d'Orsay, the only work by the Austrian painter belonging to the French national collections. It was acquired in 1980 by the State from a merchant.

Extensive research has established that it belonged to the Austrian Eléonore Stiasny who sold it during a forced sale in Vienna in 1938, during the Anschluss, before being deported and murdered.

What artworks are being returned?

A painting by Chagall, entitled "Le Père", kept at the Center Pompidou and entered the national collections in 1988, has been added. It was recognized as the property of David Cender, a Polish Jewish musician and luthier, who immigrated to France in 1958.

For 13 of the 15 works, the beneficiaries were identified by the Commission for the Compensation of Victims of Spoliation (CIVS), created in 1999.

France has long been accused of lagging behind several European neighbors when it comes to reparations.

A research and restitution mission for cultural property looted between 1933 and 1945 was created within the Ministry of Culture two years ago.

100,000 works of art were seized in France during the 1939-1945 war, according to the Ministry of Culture. 60,000 goods were found in Germany at the Liberation and returned to France. Among them, 45,000 were quickly returned to their owners.

About 2,200 were selected and entrusted to the custody of the national museums ("MNR" works that can be returned by simple administrative decision) and the rest (about 13,000 objects) were sold by the administration of the Estates in the early 1950s. many looted works have thus returned to the art market.

A "framework law" could facilitate restitutions in the years to come. According to Bachelot, "we will get there".