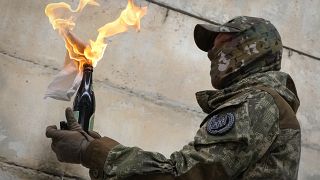 Culture icons are getting involved in the latest threat to peace in Eastern Europe.

While EU chief Ursula von der Leyen warns that Russia will face "severe consequences" if there is any military aggression against Ukraine, the artistic community is making itself heard with an open letter.

More than 350 authors and artists, some of whom have international profiles, have signed a letter opposing any form of military threat by Russia against Ukraine.

"We appeal to the political leaders to resolutely oppose Putin's aggression. We support dialogue with Russia, but demand the immediate and unconditional withdrawal of Russian troops from Ukraine's borders," says the statement that was initiated by artists Wolf and Pamela Biermann, the German film actor Burgardt Klaußner and Berlin international literature festival director, Ulrich Schreiber.

Other illustrious signees are Romanian-born German novelist Herta Müller who won the Nobel Prize for Literature in 2009, the British novelist Ian McEwan and the Chinese artist Ai Weiwei.

McEwan's publicist in the UK confirmed the signing but told Euronews that the writer had no further comment.

"One cannot silently accept the fact that, more than eighty years after the Munich Agreement, Europe is again openly threatened with an invasion of foreign, sovereign territory," the statement continued.

"We support dialogue with Russia, but demand the immediate and unconditional withdrawal of Russian troops from Ukraine's borders. Our solidarity and respect goes to all democratic fighters in Ukraine, in Belarus – as well as in Russia itself."

Ulrich Schreiber has ties to both Ukraine and Russia: as well as running the Berlin Literature Festival, he has been chief of the Odessa version since 2015, and he studied in the Soviet Union in the late 1970s.

"Every action, letter, statement, demonstration is changing the world. Some actions more, some less," Schreiber told Euronews, adding that the letter had been translated into both Ukrainian and Russian and sent to the media in both countries.

The US says Russia has amassed more than 100,000 troops near Ukraine's border and has warned it could invade.

Moscow has denied it wants a war and says NATO expansion near its borders poses a national security threat. It therefore demands a pledge that Ukraine — formerly part of the Soviet Union — will never join the transatlantic military alliance.

The open culture letter was initiated by German artists and comes in the wake of a ban on a German media organisation by Russian authorities.

It was thought to be retaliation by Russian authorities after a German media regulator banned the Russian channel, Russia Today. Watch Euronews' report below.

Meanwhile, in Washington, US officials said a plan for a fake attack on Russian territory or Russian-speaking people was described in declassified intelligence shared with Ukrainian officials and European allies in recent days.

It was the latest example of the Biden administration divulging intelligence findings as a tactic to stop Russian disinformation efforts and foil what it says is Putin’s attempt to lay the groundwork for military action. However, some have questioned the veracity of US claims due to its hesitance to provide concrete evidence.

Russian officials have rejected the allegations, with foreign minister Sergey Lavrov speaking of the "absurdity" of the claims.

Meanwhile, the first of the 1,700-unit-strong US troop contingent arrived in Poland at the weekend, following US President Joe Biden's promise to send military support to Europe earlier in January.

At the same time, Russia sent two long-range nuclear-capable bombers on patrol over its ally Belarus in what the Kremlin said was practice interaction with the Belarusian air force.

Michael Jackson biopic to be made by producer of 'Bohemian Rhapsody'