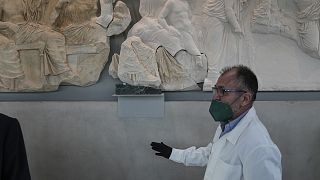 A conservator stands next to a Parthenon fragment, on loan from the Antonino Salinas Regional Archaeological Museum of Palermo, at the Acropolis Museum in Athens   -   Copyright  AP Photo/Thanassis Stavrakis
By Euronews  with AP  •  Updated: 11/01/2022

It's only the size of a shoebox, carved with the broken-off foot of an ancient Greek goddess.

But Greece hopes the 2,500-year-old marble fragment, which arrived Monday on loan from an Italian museum, may help resolve one of the world's thorniest cultural heritage disputes and lead to the reunification in Athens of all surviving Parthenon Sculptures — many of which are in the British Museum.

Officially, Sicily’s A. Salinas Archaeological Museum is only lending the foot of Artemis, goddess of the hunt, to Greece for a maximum of eight years, but the museum’s director Caterina Greco said that it was a “necessary act” in what is “an emotional moment” for the Italian institution.

“We are pleased to have been able to carry it out because it is an event of great importance and of important symbolic significance for archaeology and for culture in general,” Greco said.

The ultimate aim, Italian and Greek officials say, is its “indefinite return” to Athens, with Greece loaning significant antiquities to Italy in exchange.

The fragment was part of a 160-metre-long frieze that ran around the outer walls of the Parthenon Temple on the Acropolis, dedicated to Athena, goddess of wisdom.

Much was lost in a 17th-century bombardment, and about half the remaining works were removed in the early 19th century by a British diplomat, Lord Elgin.

They ended up in the British Museum, which has repeatedly rebuffed Greek demands for their return.

Greek prime minister Kyriakos Mitsotakis said the Sicilian museum's gesture “paves the way also for the British Museum to enter into serious discussions with the Greek authorities in order to find a solution that will be mutually acceptable".

"When there is a will, there is a way,” he stated, adding that “sooner or later it will happen.”

“We are looking towards constructive engagement with the British Museum to find, again, as I told you, a mutually acceptable solution,” Mitsotakis explained.