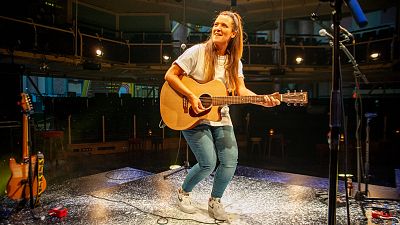 Actor Lauryn Redding's year was eventful to say the least   -   Copyright  Pippa Rankin
The opinions expressed in this article are those of the author and do not represent in any way the editorial position of Euronews.
By Lauryn Redding  •  Updated: 30/12/2021

Actor and writer Lauryn Redding reflects on the effect COVID-19 has had on the world of theatre, and how she used this time to write her debut, award-nominated play Bloody Elle.

I’m sitting, wrapping Christmas presents with headphones on in my digs in Blackheath, south London. I was living in Manchester but having landed a theatre job in London for most of 2020, I decided to move out of my cosy flat and be a ’nomad’ for the year - while saving some money and living the London life again for a bit.

In my headphones - on repeat - I have the lines of ‘Bottom’ from A Midsummer Night’s Dream.

I had been cast in two Shakespeare productions that would run in rep at Wilton’s Music Hall, London, in 2020. I was to play Lady Macduff in ‘The Scottish Play’ and Bottom in ‘A Midsummer Night’s Dream’.

The shows had previously been on tour, meaning most of the cast were already rehearsed, so I had a significantly shorter rehearsal process than usual - just two weeks to be precise. Two weeks to learn two full all-singing-all-dancing Shakespeare productions.

That’s why the lines were repeatedly gnawing into my skull through my headphones: I needed to be off-book from day one.

“I see their knavery; this is to make an ass of me.”

I never got to play Bottom.

After rushed, short rehearsals I sustained a bilateral knee injury during a fight sequence in only our second performance of ‘The Scottish Play’ - which was also press night.

I was taken out of both shows, underwent major knee surgery, and was later diagnosed with PTSD. I spent the best part of the year getting back on my feet. Literally.

So the hell of 2020 began for me a couple of months before the rest of the world went into free fall.

When March hit, I watched from afar as the industry I loved crumbled. I had lost my work for the foreseeable future because of injury, but to see all my friends and colleagues lose theirs too was impossible to witness.

Shows being pulled left, right and centre, theatres closing their doors, amazing talent being forced to leave the industry for good. This was all exacerbated by the UK government’s lack of financial support for self-employed and freelance workers, which caused a real divide.

This really showed our politicians’ true colours and lack of appreciation for what we all do. Being told to ‘retrain in cyber’ was a kick to the gut.

Yet the real irony was that everyone in lockdown turned to art. Live streams of theatre shows, Netflix series, podcasts, films, music: the arts got everyone through this hell, yet we felt - especially in theatre - that we were being forgotten.

Finding the time to sit and just write

Now, what do you do when you’re in a wheelchair, living out of two suitcases, with no base, watching your industry and career slip through your fingers, I hear you ask?

I made a pact with myself; the night before I went in for surgery, I promised myself I’d use this enforced downtime wisely and write.

They say it’s always darkest before the dawn. Well, during the darkest time 2020 also gave me the greatest gift. Being an actor, musician and writer I’d never had the time to sit and just write.

I wrote ‘Bloody Elle’ between doses of pain relief, frozen peas, and online physio exercises. I wrote it in my most vulnerable state allowing me to access emotions, humour, and truth I don’t think I would have managed to without this adversity.

And writing it, in turn, undoubtedly saved my life.

I believed in it, as I guess every writer does when they put pen to paper, but this felt different; I believed in it because I’d never seen anything like it.

I am a lesbian and have always been frustrated by the lack of relatable female queer voices in theatre and on screen. I find lesbian storylines are often thrown in for effect, fetishised, presented as a ‘phase’, or just there for the male gaze. I wanted to write a story based on my experiences.

Bloody Elle is a beautifully brutal lesbian love story. It’s a clash of class that bashes through the thick and thin of growing up and coming out in working-class northern England. These voices are rarely heard, but they matter. Representation matters.

From paper to performance

I began pitching Bloody Elle to theatres, directors, and producers.

The very sexy silver lining of this COVID cloud of hell was that many creatives were free to work. Normally they’d be booked up for months in advance - years in some cases!

I aimed high with who I approached, and before I knew it, I had the dreamiest team on board.

For my whole career, I had dreamed of working at the Royal Exchange in Manchester - but had so far never even landed an audition. I received a call from Bryony Shanahan, the co-artistic director of the Royal Exchange, asking if I wanted Bloody Elle to reopen the main stage in 2021. It’s safe to say I cried…and then of course said yes.

The next step was ensuring that I would be fit enough to perform. Between rewrites, emails, zooms and recordings, I was at the gym every day, restrengthening the muscles I had lost. I was speaking to a therapist to get my PTSD under control too. I was determined.

Reopening and courage for the future

It ran for a month, gaining 5-star reviews and filling the (socially distanced) auditorium.

The outpouring of love and gratitude from audience members was overwhelming - from parents thanking me for understanding their child better, to people thanking me for finally allowing them to see themselves represented. Some people saw the show and then had the strength to come out to family afterwards.

The future for Bloody Elle is bright. I am currently in the recording studio laying down the soundtrack, and there are many plans afoot for a future theatre run and tour in 2022, and a TV series.

I have learnt from my journey, that nothing is impossible.

The pandemic began for me, sitting in a wheelchair, wondering if my industry would survive. Wondering if I’d ever be able to do the job I love - and have sacrificed so much for - again. I could have so easily been defeated.

But after brute determination (and a lot of love and support) theatre is back and so am I - and we’re heading towards a very bright future.

How to survive a robot apocalypse according to films

The 11 best European films on Netflix