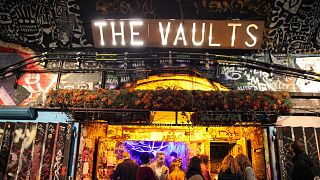 The VAULT Festival sign above one of the underground venues   -   Copyright  VAULT Festival
By Jonny Walfisz  •  Updated: 06/01/2022

VAULT Festival 2022 officially announced its cancellation on Jan 4, just three weeks before the three-month-long performing arts festival was due to begin.

Announced on Twitter, the festival’s official statement wrote, “We have made the gut-wrenching decision to cancel VAULT Festival 2022.”

“Since the emergence of the Omicron variant, we’ve explored numerous options to still be able to deliver our 10th anniversary Festival safely and successfully, all of which were found to put our staff and artists at risk of being subjected to months of stress, uncertainty, and insurmountable financial vulnerability.”

It is with broken hearts that we announce the decision to cancel VAULT Festival 2022. Our full statement follows in the thread below and is available now on our website at: https://t.co/o5zp2Pq1SPpic.twitter.com/ExknqfUcDS

The VAULT Festival is an annual celebration in London of emerging theatre artists. The three-month schedule features hundreds of fringe theatre shows, cabaret, and musicians. VAULT Festival 2022 was planned to include over 500 productions, with 2,000+ performances to over 80,000 people.

“It was an incredibly challenging and emotional time as we considered a vast array of factors. We had to focus on putting people first - we always want artists, audiences and the people we work with to have an enjoyable experience, as we fundamentally believe this permeates everything,” Adam Gray, executive director of VAULT tells Euronews Culture.

“It takes 120 people to provide this experience over the eight weeks - the scale of the festival would inevitably see people fall sick, require staff and performers to isolate and cancellations would be in abundance.”

“The impact of the Omicron variant would interrupt the festival to a point where it would be detrimental to everyone’s health, safety and wellbeing,” he adds.

This is the third year running that VAULT has had to cancel the festival in some form. Taking place from January to late March, the festival had to pull its 2020 run midway through when London was put under lockdown due to the outbreak of the pandemic. The festival’s 2021 run was also shelved during the planning phase in the summer of 2020.

Fears of a lost generation of theatre

The news of the festival’s cancellation immediately caused an outpouring of grief for the damage to emerging playwrights across the UK.

“The most important piece of advice I want to give anyone with a cancelled Vault Show is to give yourself the time to grieve it. Whether it returns or not is of no matter if you burn out getting it back on stage. Take a breath, take some time & then regroup,” wrote writer and performer Tabby Lamb on Twitter.

The most important piece of advice i want to give anyone with a cancelled Vault Show is to give yourself the time to grieve it. Whether it returns or not is of no matter if you burn out getting it back on stage. Take a breath, take some time & then regroup.

Lamb was working on bringing an installation to the festival that would last the entire three-month run. Artists also at the Festival could use the space Lamb created to do whatever they needed in the build up to their own performances, and would then write on the windows what they would have paid for the usual use of such a space.

“The idea was to expose everything else that goes into making theatre that audiences may not be aware of.”

Although naturally devastated to see the performance cancelled, Lamb accepts it was the only decision the festival could make. “With the rise of cases and the current omicron threat, cramming a bunch of people together in small damp underground rooms just doesn't seem safe.”

“The initial reaction we’ve heard from artists is a mix of relief, disappointment and understanding. I share their grief, and their desire to create and showcase their works. The performing arts sector has been severely disrupted and damaged over the last two years,” Gray says.

Jon Barton was due to hold writing workshops across the festival for playwrights looking to develop their craft. A writer with nearly a decade's experience in theatre, he laments the removal of opportunity for new artists.

We risk losing an entire generation of artists

“New artists cannot emerge if there’s nowhere to emerge from. At VAULT Festival, it’s possible to get scouted for paid commissions. And because it kicks off the year, VAULT historically fuels work that goes on to other festivals, including Edinburgh.”

“We risk losing an entire generation of artists with the continued disruption, and the government support for freelance artists has been pitiable. All this has a significant long-term effect on who gets to create work, and ultimately narrows the pathway to success,” he says.

“We have not received any support from the government in response to the Omicron variant.”

Lamb, by contrast, tells Euronews how creatives in the UK have been hung out to dry - not by the festival’s cancellation - but by the British government's inaction.

“Other industries when they shut down were bailed out by the government, or given loans to continue paying their staff but as theatre runs on freelancers we've just been left in the gutter.”

Despite the sadness expressed universally for the cancellation of the festival, a silver lining appeared in the huge amount of support offered by other theatre institutions across the country.

Countless theatres have offered affordable slots in their programming for cancelled fringe shows, artists have made public offers of consolation, and there have been suggestions of reworking shows for new mediums.

So sad to hear about @VAULTFestival huge hugs going out to all involved (& the mighty V crew!)
Once regrouped, if any emerging theatremakers have a show ready to go, we offer box office splits with no fees & would love to offer space where poss! info@breadandrosestheatre.co.uk

Were you producing a musical or piece of music theatre at @VAULTFestival? I'm wondering about creating an album with a fully produced song from each show. If you're interested get in touch.

“I imagine everyone is worried about their security in the future and for 2023. We’re working and strategising hard now to re-imagine what 2022 will look like, and how the Festival will look in the future,” Gray says.

“We feel fortunate there is overwhelming support for VAULT, and for the vibrant artists we work with. It is heartwarming to read the comments and reactions people have on social media - the festival is loved, and there is an outpouring of emotion and love for it.”

“We are gutted that the Festival for 2022 isn’t going ahead as planned, however that's not the end of the story. There are great things to come this year and beyond,” he says.