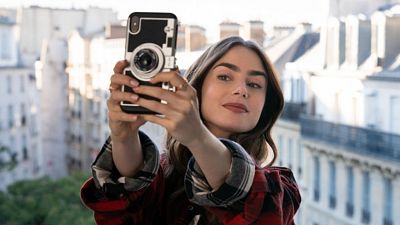 The Netflix hit has come under fire for an unsavoury portrayal of a new Ukrainian character   -   Copyright  Reuters
By Shannon McDonagh  •  Updated: 03/01/2022

A letter has been sent from the Ukrainian government to Netflix over the "insulting" depiction of a character from Kyiv in their show 'Emily in Paris'.

The drama's second season arrived on the streaming platform at the end of last year, leaving its Ukrainian fans disappointed by the inclusion of a character that adheres to harsh stereotypes about the country.

Petra, played by Daria Panchenko, is introduced as a classmate to the show's titular character, Emily, in this series' fourth episode.

It is soon apparent that the purpose of her role goes no further than being poorly-dressed shoplifter who fears deportation from France.

Ukraine's Culture minister Oleksandr Tkachenko has taken issue with Petra's characterisation to the point of contacting the streamer – worth €35 billion – to discuss the matter.

He detailed his frustrations in a Telegram post, accusing the show of leaning on "a caricature image of a Ukrainian woman that is unacceptable.

"Is that how Ukrainians are seen abroad?" he wrote.

Time will tell as to what Netflix's response to this case entails now it has become a government matter.

But Tkachenko isn't the only person that thinks Petra's character poorly reflects Ukraine.

New season of @Netflix Emily in Paris offended Ukrainians. Cause the only Ukrainian character in the show was depicted as stupid shoplifter named Petra from Kyiv. She was ridiculous, unfunny and then offensive. We do not enjoy representation in Western shows.

Other viewers called the storyline "humiliating":

emily in paris really made the one eastern european in the show a thief and thought it was ok bc petra is white literally any basic research will tell you how much xenophobia exists within western europe with these type of stereotypes against eastern europeans...

The way Ukrainian girl is portrayed in 2nd season of "Emily in Paris" is outrageous! @netflix Do you really think Ukrainian girls are ugly primitive thieves? Come to Ukraine and see on your own the amount of highly intelligent educated beautiful girls. You owe us an apology!

Though Netflix has expanded into a number of foreign-language markets over the past few years, much of its content remains USA/UK-centric.

Some viewers were saddened that their first exposure to an Eastern European character on the platform was such a negative one.

I don’t watch “Emily in Paris” but there’s some controversy brewing about Kyiv-born Petra playing into Eastern European stereotypes too heavily and then making her a criminal. First off that name?? Second, what year is it again? Do better, @netflix.

Has anyone seen Emily in Paris?? Very funny ukrainian character I think everyone should watch to see how we dress and steal everything lol

Some saw comedy in the fact Petra isn't even a Ukrainian name – you're more likely to encounter it in Russia, Germany, or the Czech Republic.

who made the writers of emily in paris believe that petra is a ukrainian name pic.twitter.com/tA3RPeF6pe

@netflix will you be issuing an apology for a caricature of a Ukrainian woman in #EmilyInParis2? Firstly, nobody’s called Petra in Ukraine; secondly, aren’t you supposed to be fighting the stereotypes and not maintaining them?

Having an American-produced show set in France that seeks to create a glamourised image of the country instigated similar problems when 'Emily in Paris' first aired in October 2020.

From berets to baguettes, not a single Gallic cliché was left unticked.

On a less glamorous note, seeing lit cigarettes in indoor spaces on the show left real-life Parisians confused – indoor smoking was banned in the country in 2007.

"Frankly, watching Emily in Paris there’s plenty to feel insulted about. When they decided to caricature us, the authors didn’t hold back," wrote Charles Martin of Premier´e after the first series debuted.

French viewers complained at the time that the immense popularity of the show could create a negative ripple effect for audiences who know little about the country.

This translated outside of France, where The Guardian labelled it "an excruciating exorcism of French cliches".

"The 10-part comic melodrama takes on every cliche about Paris – snobby bosses, postcard views, moguls and mistresses, a hunky neighbour – and enthusiastically stacks them high. Frivolity has a place, but this is shameless," wrote The Age's Craig Mathieson.

However, creator Darren Star (responsible for the likes of Sex And The City) defended his show at the time as a love letter to the city and its offerings.

"I wanted to showcase Paris in a really wonderful way that would encourage people to fall in love with the city in a way that I have," he said.