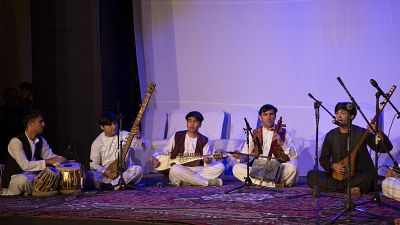 Thousands of kilometres away from home, a group of music students pick up their instruments once again. The Afghanistan National Institute of Music (ANIM) has been silent for months after the Taliban took over their country and school in August.

Through Qatar's support the students were airlifted to Doha on five flights, over six weeks, between October and November. ANIM founder, Dr. Ahmad Sarmast says, “the very first priority was to help the children…and to give them another opportunity to continue their education.”

Filling the musical devoid in Afghanistan

Musicians have been historically suppressed under Taliban rule in Afghanistan. The last time they took over in the 1990s, they placed a ban on music, including the national anthem.

After the Taliban lost power, Dr Sarmast set his sights on promoting music talent in the war-ravaged nation, founding ANIM in 2010. It was representative of a new country where boys and girls studied together and played to audiences across the world.

“I went to Afghanistan not only to revive the musical tradition of Afghanistan, but also to transform the lives of disadvantaged kids through music,” Dr Sarmast tells Scenes. He strongly believes that music can be transformative because of his father who had become a well-known artist in Afghanistan despite humble origins, all thanks to the power of music.

ANIM secured funding from the World Bank and several other charitable organisations which helped the school enrol over 300 students. Almost 60 per cent of the students came from underprivileged families.

One of them, Marzia, is an 18-year-old viola player, left at an orphanage by her parents when she was just nine years old. Marzia was sent there because it was a way to get an education. At the orphanage Marzia was encouraged to learn music and enrol at ANIM. “At first, I didn't like music because my family always told me music is haram [forbidden],” she recalls.

When she arrived at the school, her perception of music changed. Despite her family not supporting her career choice, she pursued her dream. “When I play music, I feel free. I love the sound and I see different people, so that makes me just think the world is different,” she says.

The programme covers two elements, Afghan traditional and Western classical music. The school’s all-female orchestra, Zohra Orchestra, has been renowned as a symbol of a more progressive Afghanistan and has toured globally.

ANIM’s focus is on the musicians of the future with many already noticing the impact it has had on their lives. “If I was not in the music school, I wouldn’t have this much courage. Actually, I wouldn’t have been able to talk to a person, let alone perform to thousands of people in a hall,” says 18-year-old Rabia who plays the lute-like instrument known as a Rubab.

“When I play music, I can really express my feelings…I really feel so proud. Not only for myself, for my family and for Afghanistan, for my country,” adds fellow classmate, Mortaza.

While the Taliban government has not imposed an outright ban on music, there are certain restrictions in place. Playing music in public is now unlawful as well as performing live in hotels.

This meant the music institution had to shut its doors. “I had no idea where my future would take me and if we would ever be able to continue to play music or not,” says Yusuf, a tabla, traditional drum student at ANIM.

These young musicians have a task ahead of them. They are the generation expected to preserve traditional Afghani sounds. “It's our responsibility to keep music alive when we are in a foreign country… we would never let anyone stop us,” says Mortaza.

“Music is a powerful force for transforming lives. Music can teach children how to live in peace and harmony. They're responsible to get the necessary skills and knowledge to be able one day to help the country once again,” adds Dr Sarmast.

A bright future lies ahead for the Afghanistan National Institute of Music. With the support of Qatar and Portugal, it has now relocated to Lisbon, where the students have been granted visas. This means the institute will open its doors once again, not only for children from Afghanistan, but also from the rest of the world.

The alternative schools offering new horizons to children in Malaysia