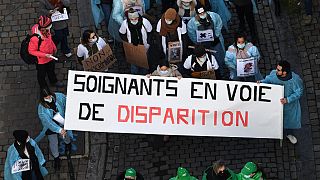 Several thousand medical workers protested in Brussles on Tuesday to call for better working conditions and to oppose mandatory vaccinations against COVID-19.

Protesters tried to storm the office of Belgium's health minister.

According to police, nearly 4,000 workers from across Belgium descended on Brussels to protest what they said were difficult working conditions because of the coronavirus pandemic.

Belgium has made vaccinations mandatory for all its health workers starting January 1.

Workers will have a three-month window to get their shots.

During that period, those who remain unvaccinated will be notified of a suspension of their contract unless they can provide a certificate of recovery from COVID-19 or negative tests on a regular basis, and will be temporarily unemployed.

From April, workers without a proper justification for their refusal could be dismissed.

Meanwhile, hospital admissions have risen by 4%.

Some participating in Tuesday's protest complained of burn out from the strain of increasing patient numbers.