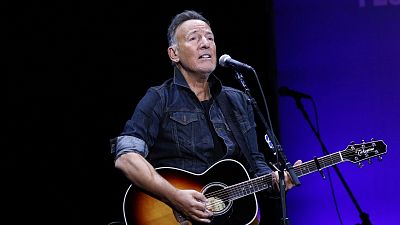 Sony Music have purchased the musical rights to the catalogue of 'The Boss' Bruce Springsteen for a record half a billion dollars (€441 million).

The deal was confirmed between the label and the 72-year-old – undoubtedly one of the world's biggest selling rock artists – on December 16.

It's the newest of a series of frenzied transactions between artists looking to cash in on big label money as a 21st-century life insurance policy.

"Sony Music Group announced that it has acquired all of Bruce Springsteen's catalogues of recorded music and compositions through two separate agreements," the label reported from its New York office.

This leaves Sony with total ownership titan anthems such as 'Born To Run', 'Dancing In The Dark', and 'Thunder Road', recorded with his primary backing musicians, the E-Street band.

Springsteen is responsible for sales of over 150 million records worldwide

Springsteen, immensely popular in the United States and abroad, has sold more than 150 million records in half a century while remaining faithful since 1972 to his label Columbia Records, in the bosom of the Japanese multinational Sony.

"For the past 50 years, the men and women of Sony Music have treated me with the greatest respect," says the 72-year-old artist,

"I am delighted that my heritage continues to be protected by a company and people I know and trust."

Owning the rights to catalogues – which make it possible to earn royalties for each use of a song, whether it is a download, or featured film or an advertisement – can be very profitable for both parties in the long term.

The artist is given a lump sum potentially greater than the rest of their lifetime earnings, and the label are granted new opportunities to work with the material in the possession.

A consequence of COVID?

Experts note that artists are 'clamouring' to cash in on their discographies as a consequences of the COVID-19 pandemic.

Major manoeuvres have been in full swing for the acquisition of musical rights, in particular with the streaming revolution and the near-impossibility of earning tour revenue.

Financial markets have shown themselves to be fond of these "portfolios" of artists deemed timeless and generating stable revenue streams.

Springsteen is the latest star to sell all or part of its musical catalog through transactions of astronomical amounts but never officially confirmed.

"By selling (his catalog) to Sony, he knows they will keep his music alive for decades to come," explains consultant Alan Cross in the online review 'A Journal of Musical Things'.

The 2016 Nobel Prize winner for literature, Bob Dylan, 80, sold his entire catalog to Universal Music last December for an estimated windfall of $300 million (€265 million) and Fleetwood Mac's Stevie Nicks reportedly got $100 million (€85 million) for her majority share of the group's catalog.

Steven Spielberg turns 75: A look back at a Hollywood visionary