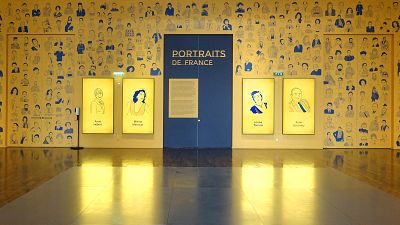 From an aviator born in Vietnam to singer and resistance figure Josephine Baker, the exhibition 'Portraits de France' at the Musée de l'Homme in Paris highlights the life of 58 women and men, who all played a part in France's "great national narrative".

Some are famous, others unknown or forgotten, but all have one thing in common: whether it was to fight for France, to sing in France, to learn French, or to be artists, France was their land of choice and envy.

From Pablo Picasso to Nina Ricci, Aimé Césaire, Marie Curie, Lino Ventura, and Dalida, these 29 incredible men and 29 incredible women all played a role in the country's development.

"We managed to find a balance between the most famous, like Dalida, Marie Curie or Aimé Césaire, and others a little less known because it was important to put them forward. I think in particular of Do Huu Vi, this aviator who died during the First World War, a native of Vietnam. We also have a Russian scientist who worked a lot in biochemistry and who made extraordinary advances in this field," said Aurélie Clemente-Ruiz, the Head of exhibitions at the Musée de l'Homme.

"By bringing out these personalities, by putting them in the spotlight, by telling their exceptional life stories, we will really embody this diversity. We are no longer in a somewhat blurred historical discourse, we are really in life stories where we will really try to show that this or that personality, at a moment in the history of France, well, they made a difference," she went on.

Through their artistic or sporting talent, scientific discoveries, social or political commitments, they reflect the diversity of French society from the Revolution to the present day.

Historian and co-curator of the exhibition Pascal Blanchard says these portraits bring together an incomplete family photo of the country, in a context of renewed interest in France's ethnic roots.

"France is a great country of immigration, but the French don't know it, whereas in the United States it's obvious. So there is a pedagogical job to be done, to transmit these stories so that they are better shared. This does not mean that it will solve all the problems of the present. But that's a matter for politicians, not historians!" Blanchard said.

"History is not something that is set in stone, we continue to write it on a daily basis. Look at the place Josephine Baker has taken in the last few years in the common narrative. Fifteen or twenty years ago, no one was talking about her. We can see that there is also a moment, when we look at the rear-view mirror of the past, all of a sudden, characters who stand out, men or women, and who, all of a sudden, make sense in the present because they tell us something else, they tell us another story and this story resonates," he added.

The exhibition is open until January 17 at the Musée de l'Homme in Paris.