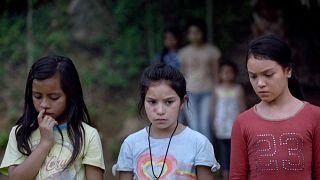 'Prayers for the Stolen' is the first narrative feature film by Mexican-Salvadoran documentarian, Tatiana Huezo.

Based on the 2014 novel 'Prayers for the Stolen' by Jennifer Clement, the story is set in a mountainous region of Mexico and centres around three girls that take refuge in their friendship to cope with the trials brought on by the presence of a drug cartel.

The film which – which premiered at Cannes as 'Noche de fuego' – has now been nominated to represent Mexico's Best International Feature Film at the 94th Academy Awards.

Rather than focusing on the horror of living in a cartel-torn area, Huezo chooses instead to capture tiny moments of childlike innocence and wonder.

"It’s not a movie for kids, definitely not, although it’s a movie full of magic, with very endearing, loving and magical moments" says the internationally awarded director.

The cast of the film consists of Alejandra Camacho and Camila Gaal, who both play Paula in the film, Giselle Barrera Sanchez and Blanca Itzel Pérez as Maria, Ana Cristina Ordonez Gonzalez and Marya Membreno as Ana.

Not only that, but it has the production backing of Nicolás Celis, responsible for producing 'Roma' – a ten-time Academy Award nominee that bagged Mexico's first ever win for Best Foreign Language Film in 2018.

The film was released on Netflix on November 17th.