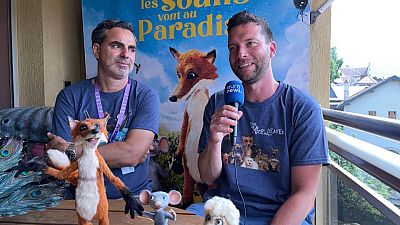 Poland, Slovakia, France and the Czech Republic have joined forces to produce 'Even Mice Belong in Heaven'.

The movie for young and old alike follows the story of a mouse and a fox who find themselves in heaven. The two companions will unite their strength and overcome their differences to find their fathers, both also beyond the pearly gates.

Euronews met with French and Czech co-producers Alexandre Charlet and Vladimír Lhoták who were in Lyon for the national release of the film.

"It's a real European adventure, both in terms of production and manufacturing, and also with all the animals who are experiencing a very epic moment," revealed Alexandre Charlet.

"We were shooting in Prague in the mythical Barrendov Studios, and then making all the 3D animation and special effects in France, and there, it was divided between 3 studios," he continued.

The film was also presented at the Annecy Animation Festival, the world's biggest animation event, in June, where it was very well received by the discerning public and critics.

Several European producers did not believe the co-producers would be able to make the film in Stop Motion with more than 50 characters and about 30 sets.

"It was considered quite complex, but I think it gives the film a certain richness," Lhoták added.

"We said to ourselves that if we don't manage to finance the film at a certain level, we won't make it, because there are so many characters, so many sets," he went on.

'Even Mice Belong in Heaven' was released to great acclaim in the Czech Republic and will be released on European screens this autumn.