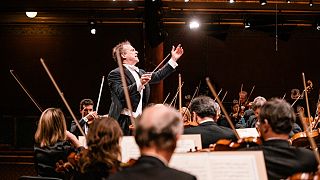 People across Europe are opening the first door of their advent calendars. And as you would expect, it's mostly chocolates behind the cardboard flap.

But the Orchestre de la Suisse Romande has come up with a calorie-free way to celebrate the days leading up to Christmas, and have decided to give you a culture fix instead.

The concept is simple: instead of a chocolate hiding behind each door, the OSR offers a new video with performances by OSR musicians and English conductor Jonathan Nott every morning at 8.00 am (CET) from 1 to 24 December.

What classical treats are in store?

From Vivaldi to Duke Ellington, from Tchaikovsky to Charlie Chaplin, from chamber ensembles to the full orchestra, not forgetting traditional Swiss melodies and collaborations with local artists, there something for everyone.

The first door will fittingly reveal L'Hiver by Antonio Vivaldi.

The Orchestre de la Suisse Romande’s musical advent calendar premiered in 2020 as an idea to continue to offer music to the concert-going public at a time when concerts were cancelled around the world due to the COVID-19 pandemic, explains Steve Roger, the orchestra's General Manager:

“We first launched the Advent Calendar in 2020, after the pandemic had forced us to cancel or amend most of our concert programme. After consideration, we decided it was a great way of sharing a musical treat with the rest of the world, and to continue the project in 2021. From classic to jazz, to film music and traditional Swiss melodies, the programme is truly varied. Of course, it’s free, and if people would like to make a donation to the Friends of the Orchestra, to support the acquisition of new instruments, they can do that too.”

Who are the Orchestre de la Suisse Romande?

An essential cultural institution in French-speaking Switzerland, the OSR is the leading symphony orchestra in the region and the main orchestra of the Grand Théâtre de Genève.

Founded in 1918 by Ernest Ansermet and currently composed of 112 musicians, the OSR is now a major international orchestra.

Blending styles and eras and at the dawn of its second century of existence, the OSR say they "aim to be an inspirational source of culture and emotion."