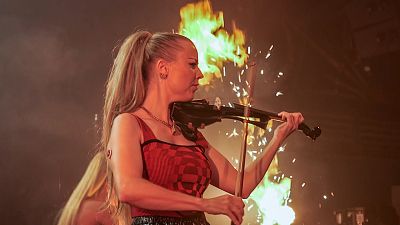 Tanya Cracknell knew she wanted to be a violinist from the age of seven. She practiced the string instrument daily, perfecting her arco and pizzicato, but after graduating from university in violin performance, she found that the passion she once had for classical music she no longer had.

Living in East London, Tanya found herself drawn to the underground music scene. Moving away from her classical roots to the frenetic vibrancy of grime.

“Having gone to a few grime gigs, the energy of the music is just like nothing else. People being able to let go, feel free,” Tanya explained. “Having grown up having to play something classically off a piece of paper where you're told what to do, that freedom of just being able to do what you want, it definitely influenced me,” she added.

Grime emerged in London in the early 2000s, evolving from the UK’s garage music scene. It’s a lyrically dexterous, diverse style of British rap music that draws influences from jungle and hip hop.

“Grime sort of was born in E3 (the London borough of Hackney), which is where I've lived for the past few years. And it just grew from basically a few kids’ bedrooms into this global phenomenon, that's respected by other countries. There are now grime scenes in Japan and Australia. And it's the sound of London, basically,” Tanya told Scenes.

The day that changed Tanya’s life

Attending an event hosted by grime producers and DJs, The HeavyTrackerz, Tanya innocently posted appreciation for them on her social media. “I just put them on my Insta story going, ‘Wow, this is amazing and they saw that I was a violinist and invited me into their studio. They just messaged me saying ‘come and prove yourself,’ it was literally that daring,” she explains.

Tanya put her stamp on the track and overnight her alter ego ‘The Grime Violinist’ was born. Fast forward a few years, she has appeared in music videos with artists such as Lethal Bizzle, Lowkey, Lady Leshurr, and performed around the world at festivals, namely Glastonbury, Boomtown, and venues including the Royal Albert Hall and Hammersmith Apollo.

“I didn't expect grime violin to take off as much as it has. People say, you're a pioneer and I was just doing what I love. I was just mixing the violin with the music that I was enjoying at the time,” Tanya said.

Early next year, Tanya will be releasing her new album, ‘CLASSIX’ which will combine classical melodies with rap and orchestra performances.

“What I’m lost in when I play grime music is mainly the bass line. I would love to say that I could recite every lyric word for word, but I can’t, it’s basically the beat, it’s what makes you nod, it’s what gets you in it. The energy is there and just for some reason it just works with the violin,” she explained.