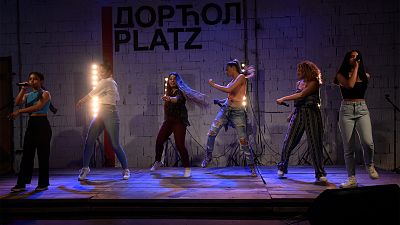 Pretty Loud are not your usual girl band. The all-Roma group do not sing sentimental and sappy love songs. Instead, their lyrics focus on the plight of Roma women and the dream for a better tomorrow.

"We sing about violence, love and equality. We sing and write about all the topics that we and other women encounter in life," Pretty Loud member Živka Ferhatović told Scenes.

The six-member group, aged in their early teens to mid-20s, were born into the Roma community that lives on the edge of Serbian society. Persecuted for centuries, Roma, are the largest ethnic minority in Eastern Europe and have been mired in poverty and historically discriminated against in education, healthcare and employment.

"People think that we (Roma people) lie, steal, that we are dirty and that we're not educated," explains Silvia Sinani, a Pretty Loud member. "There is a lot of discrimination. They look at us differently," Živka adds.

For Roma women, the situation is even more challenging. In the Roma community, patriarchy is strong and rooted deep into tradition. Women and girls face gender expectations and early marriage is commonplace.

"In Roma customs, the man is the head of the household and the woman must listen to the man. It's normal in our families for the man to go out and do what he wants and the woman to stay at home and be a housewife," Živka explains.

According to a 2019 study by the United Nations Children Fund (UNICEF), one in six school-age Roma children in Serbia are outside the education system. The report found that 16 per cent of Roma girls marry before the age of 15 and over 50 per cent are married by the age of 18.

Pretty Loud is determined to change mindsets. Their songs highlight the abuse Roma women suffer at the hands of men. They encourage women to stand up for themselves and their rights.

"We have a song called Samanta, based on a true story. It's about a girl whose father forced her to get married early because of poverty and traditional customs," Silvia told Scenes. "The message we send is that a girl should be independent, strong, believe in herself and have a goal and not get married early," Dijana Ferhatović, a Pretty Loud member, added.

Pretty Loud was formed in 2014, during an artistic workshop held by the Gypsy Roma Urban Balkan Beats (GRUBB) School. Founded in 2006, GRUBB works to support education and future development within the Roma community.

Many of Pretty Loud's songs focus on encouraging Roma children to stay in education. "We want to send the message that every girl, boy, woman and man should be educated because for me education is the most important thing," Živka explains. "I think we, as Roma people, need to show a different image of ourselves. That Roma people are educated, they can be employed in jobs they want to do and not be limited," she adds.

Meet the cholita skateboarders breaking down stereotypes in Bolivia