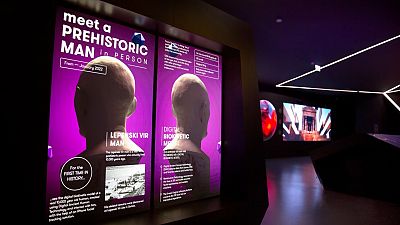 Is it possible to bring ancient people “back to life”? Is it then possible to interact with them?

Serbia will provide the answer on December 11, when the world premiere of the Digital Metahuman is scheduled at the Serbia Pavilion at Expo 2020 Dubai.

For the first time in history, visitors to the Serbia Pavilion can interact with the authentic, mobile and responsive 3D face of a man who genuinely lived in prehistoric times and died on the banks of the River Danube over 10,000 years ago.

Archaeological reconstructions of ancient faces have long been known. Serbian scientists however have taken this science to a new level. They have combined the knowledge gained from the study of bones (osteology) with DNA science and other forensic processes, not only to create an accurate, realistic 3D face of a man who died ten millenia years ago, but to animate it and to bring it to life with genuine, responsive facial expressions. Serbian scientists call this Digital Human Technology (DHT).

The first Digital Human Technology project is the face of a Neolithic man whose remains were discovered at the site of Lepenski Vir in eastern Serbia, on the banks of the River Danube. We now know that he was about fifty years old when he died, was around 178 cm tall, weighed 70 kg and ate a substantial diet of fish. He was buried in the “lotus" position, indicating he had important role within his community.

Serbian scientist Sofija Stefanović, associate Professor at the Department for Archaeology, University of Belgrade, who stands behind this project along with experts from a domestic Serbian gaming company, explains the remarkable achievement:

“We use a novel technology called Digital Ancient Human (DAH) which combines a number of different methods to produce a scientifically-based osteobiography of ancient people. The methods include state of the art protocols for bone studies, such as isotopic study to reconstruct diet, a tooth cementum annulation method to reconstruct precise age at death, computer tomography to reconstruct level of physical activity and 10x deep ancient DNA sequencing to reconstruct the color of skin, eyes and hair and to find out some other phenotypic characteristic, such as tolerance to lactose or muscle performance. We used those data to support physical reconstruction of the face based on skull bones. This is then transport reconstructed face to the digital biokinetic model which simulates his facial gesticulation.”

The achievement of DHT marks a perfect marriage between archaeology, science, and unusually, gaming technology.

Metahuman may be number one, but there's nine more good reasons to visit:

Aside from being one of the few countries in the world that have a National AI Strategy, and one of the first countries to introduce coding as mandatory subject in elementary schools, Serbia's creative industries are one of the fastest growing branches of the economy.

The theme of the Serbian pavilion is Serbia Creates Ideas; Inspired by the Past, Shaping the Future and it celebrates a nation with creativity and innovation embedded deep within its DNA. Today, Serbia is busy finding creative and innovative solutions to some of the world’s most pressing challenges, from environmental sustainability to the adoption of artificial intelligence (AI) and from feeding a growing population to the management of public health.

At the digital exhibitions on the second floor of the pavilion, you’ll discover why Serbia is called the Silicon Valley of the Balkans, why it is a frontrunner in eGovernment, and how it proudly hosts a European Center of Excellence for ICT solutions for agriculture.

Hot Tip: Check out the Chronology of Creativity, charting over 10,000 years of inventions and artistry on Serbian soil.

Vinča Culture changed the course of human history because it marked the very first time that humans permanently settled in cities.

This ground-breaking act resulted in an explosion of innovation, including the world’s earliest known extractive copper metallurgy. It also sparked incredible creativity from specialised crafters in ceramics, jewelry and thread-weaving. The Vinča Culture sparked other kinds of creative solutions too, from extensive trade networks to highly developed social relations and conflict resolution procedures.

Vinča was the first society of the Modern Age, and Serbia’s exhibition explores it through six of its most important themes: Trade; Community; Technology; Artistry; Education and Food and Agriculture.

Hot tip: Check out the two-headed Vinča-inspired statue by Aleksandr Bunčić, based on one of the most recent artefacts discovered at a Vinča archaeological site.

The architecturally striking 2,000 m2 Serbia Pavilion is located in the heart of the Expo’s Mobility District. Just as the Vinča Culture sparked many of the world’s most ground-breaking ideas in the past, so does the Serbian Pavilion – with its design reminiscent of the pitched roof of a Neolithic Vinča dwelling – today. It showcases Serbia’s contributions to humanity’s future, with Digitisation, AI and Virtual Reality at its core.

Hot tip: Check out the staff uniforms designed by the award-winning designer of film and theatre costumes, Ivana Vasić English.

An Expo 2020 visit can be exhausting. The ideal place for this is our chill-out zone where unique hand-woven cushions with the Pirot design are waiting. The Strawberry Smart Bench in the garden of the Serbian Pavilion is the first of its kindto bring free solar energy and connectivity to public spaces.

Tesla constructed many motors, irreplaceable today more than 130 years after he invented them. He created the first inducted motor in 1883. But the marketable version from 1887 is what supports nearly 80% of the worlds current industry.

Tesla’s city lighting based on the AC system was first presented to the public at the World Expo in Chicago back in 1893. At the New York Electrical Expo in 1898. Tesla amazed audience demonstrating a remote-controlled boat, the first modern robot.

Hot Tip: Visit the VR Exhibition on the 2nd floor for a breath-taking immersive experience into Tesla’s greatest and most important inventions.

Serbia’s national day is February 15, and Serbia will be delivering a day-long programme with traditional music and dance, parades and presentations.

Hot Tip: Look out for the unique cross-over performance of virtuoso violinist Stefan Milenković playing together with one of former Yugoslavia’s favorite rock performers Nele Karajlić

8. Get Up close and Personal with David Guetta

If you’ve ever dreamed of entering the DJ box at a major European music festival, now’s your chance. In the VR exhibit at the Serbia Pavilion, you can immerse yourself in the sights and sounds of EXIT, South East Europe’s premier music festival, and visit top DJ David Guetta as he spins his magic, right on the stage. Founded in 2000, EXIT has twice won the Best Major Festival award at the European Festivals Awards, for 2013 and 2017. EXIT has also won the "Best European Festival" award at the UK Festival Awards in 2007. Unmissable.

Serbia has a highly-developed food production industry covering 5 million hectares of agricultural land in excellent climatic conditions. Serbia is, in many ways, self-sustaining and it produces and exports raw materials, ingredients and finished food products to the region and the world.

The quality and constant improvement of the industry is contributed by 16 specialised research institutes, based on whose expertise this sector constantly strives for technologically advanced production, ensuring high quality products and environmentally oriented production.

Serbia is also the proud host of the European Center of Excellence for ICT Solutions in Agriculture. BioSense Institute shows the vision where sensors of the future (Multispectral sensor Plant-O-meter) mounted on robots and satellites will sense the condition of the plant and help it grow better.

And finally, even if you can’t get to Dubai, you can still experience the Serbian Pavilion. The Pavilion is accessible both via the website and VR headset. The pavilion presents an integrated dual platform for displaying Serbia’s stories – a physical pavilion in Dubai and a virtual/digital pavilion online integrating timeless and limitless content with real space.

Visitors from all over the world can use their VR headset from their home, create digital avatars and walk through our pavilion in virtual reality.