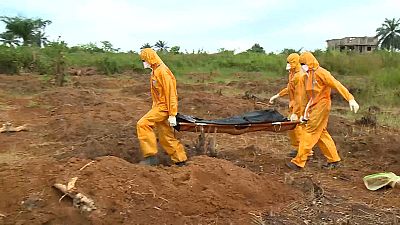 Cry Like a Boy takes you on a journey to five African countries to meet the men who are challenging gender stereotypes   -   Copyright  Cry Like a Boy
By Marta Rodriguez Martinez  & Carielle Doe  •  Updated: 18/11/2021

Mark Korvayan was head of the burial team during the Ebola crisis. Even today, more than six years after the end of Liberia's deadly virus outbreak, he still remembers the three days he nearly resigned.

Ebola is extremely dangerous. On average, 50 per cent of those infected die. Liberia reported its first cases of Ebola in March 2014.

Not only was Korvayan shocked by seeing the death of so many people in his country first-hand from a largely unknown and lethal virus, but he also remembers the rejection he faced by people in the various communities where he had to retrieve the bodies.

“We faced a lot of tension in various communities,” Mark recalls, noting there were even violent episodes.

He says these were some of the most difficult days of his life and that he used to return home fearful he could infect his family, a wound that still takes a toll on his mental health.

The Nobel laureate Ellen Johnson Sirleaf was then the country's president and had to make a difficult decision in the face of the rapid spread of the virus in the country: cremate the bodies. A decision that still weighs heavily on her shoulders and those of the burial team led by Korvayan.

Cremation is not part of the Liberian funeral culture, Liberians want to have a grave where they can remember their loved ones.

“Women take decisions or do their best to protect human life,” the former president and first female president in the African continent said at the time. Sirleaf knew her popularity would suffer, but she did not back down.

“Men are more concerned in remaining in positions of authority and the macho type of things,”Sirleaf said.

Korvayan is not alone in feeling the worst days of his life were during the Ebola outbreak. Many other men in Liberia have not yet managed to overcome the trauma.

“No matter how painful a situation is. You tell them men don't cry. So men are not supposed to cry,” says Dorbor Jallah, head of The Carter Center, which runs mental health support programmes in Liberia.

“Sometimes these cultural barriers tend to prevent people from being able to deal with it, whether it's trauma or other forms.”

Gender, trauma, masculinity and stigma: click on the player at the top of this webpage to watch the video of Cry Like a Boy in Liberia.

If you want to listen to the first season of Cry Like a Boy, a podcast that takes you on a journey to five African countries to meet the men who are challenging gender stereotypes, click here. Also in French under the name Dans La Tête Des Hommes.

Podcast | The women who redefined the frontline in Liberia's civil war