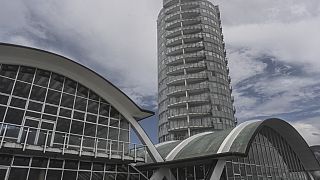 This photo taken on September 28, 2021 shows the cylindrical design of Hotel Humboldt, a work from the 50s designed by the Venezuelan architect Tomas Sanabria.   -   Copyright  YURI CORTEZ / AFP
By Josephine Joly  •  Updated: 09/11/2021

Venezuela, today plagued by an economic crisis and riddled with zinc houses, was once at the forefront of design and architecture in Latin America with projects signed by world-renowned artists and architects.

Hidden inside its capital is a jewel of 1950s architecture, the Hotel Humboldt, also known as the hotel that "floats among the clouds".

Located 2,150 metres above sea level, it can only be accessed by cable car or by road with a rustic 4x4. Both the tower and its undulating arches can be seen from the city.

The 1950s were, for Caracas, a magical decade. A period that also coincided with the arrival of European immigrants, which led to the creation of projects by world-renowned architects and artists.

"It was a generation of intellectuals, of architects who had a vision of the future and who thought that such a future was possible in Venezuelan society. And (in the end) it was not," said Paulina Villanueva, daughter of Venezuelan modernist architect Carlos Raúl Villanueva, who was involved in the development and modernisation of Caracas.

"The Hotel Humboldt is Venezuela's historical heritage and we are working to have it listed as a world heritage site, just as the University City, which is a contemporary piece, has been listed," expressed Carlos Salas, director of operations at Hotel Humboldt.

Built between 1940 and 1960, the Ciudad Universitaria de Caracas (University City of Caracas) was recognised as a world heritage site by UNESCO in 2000.

The university was designed by architect Carlos Raúl Villanueva and is an outstanding example of the Modern Movement in architecture.

The complex integrates 40 buildings and functions into a clearly articulated ensemble, including masterpieces of modern architecture and visual arts, such as the Aula Magna with the "Clouds" of Alexander Calder, the Olympic Stadium, and the Covered Plaza.

Its unmistakable colourful facades have also integrated works by renowned artists such as Victor Vasarely Jean Arp and Wifredo Lam.

However, with the economic crisis that has plagued the country since 2013, the buildings that once made Venezuela famous have been in severe decline for years.

"What makes me sad is to understand that on the one hand there are people who love the university very much, but who have no opportunities," added Villanueva.

"The last time I was here there was a problem in the Aula Magna. They (teachers and students) are working with their fingernails to maintain the little that is left," she went on.

Along with the Ciudad Universitaria, many of the buildings of Venezuela's golden age are in poor condition.

They now symbolise a part of Venezuelan history that has, gradually, been forgotten.