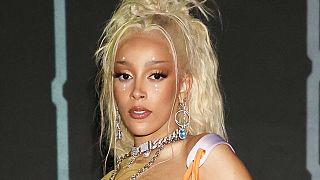 Doja Cat's smash hit 'Say So' was named Song of the Year at Broadcast Music Inc.'s 2021 R&B/Hip-Hop Awards on Monday.

The awards, which recognise the achievements of top songwriters, producers, and music publishers in the genres, were presented online this year.

BMI officials highlighted the song, which peaked at number five on the Billboard Hot 100 and inspired "a viral TikTok dance challenge that saw celebrities and fans joining in on the fun and fueling the record's success." It was written Doja Cat and Lydia Asrat.

Roddy Ricch was named Songwriter of the Year for penning five of the 35 most-played songs of the year, including Rockstar, his collaboration with DaBaby, and The Woo, his team-up with 50 Cent and Pop Smoke.

Producer of the Year went to Metro Boomin, winning for the fourth time after being honoured with the title in 2015, 2016, and 2017. Songs of Kobalt Music Publishing landed Publisher of the Year, as they represent 19 of the 35 best performing songs, including Say So and Megan Thee Stallion's Hot Girl Summer and Savage.