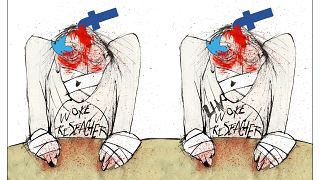 For many years in the United States, then Canada, the United Kingdom and now in the rest of Europe, censorship, ostracism, anathemas, threats, destruction or vandalism of works of art, attempts at linguistic and historical revision, and media lynching campaigns on social networks have been spreading, carried out by activists or associations of gender or racialised minorities.

Based on the awareness of the unresolved, very real, social and racial injustices, discrimination and violence suffered by minorities in the Western world, this new self-righteous culture, referred to as Woke or Cancel Culture, promotes a moral imperative to fight against them, by all means. Diversity is reduced to skin colour, religion, gender or sexual orientation.

For activists, the purpose of literature and art should be to convey positive messages and correct the social imbalances. For example, in a paper published in the January 2021 issue of the School Library Journal, Amanda MacGregor, a Minnesota-based librarian, bookseller and freelance journalist, affirms that “Shakespeare’s works are full of problematic, outdated ideas, with plenty of misogyny, racism, homophobia, classism, anti-Semitism and misogynoir” and should be banned in schools. As the Journal reports, many other teachers in the US refuse to teach Shakespeare questioning the 'whiteness' of his plays.

Following reports to the UN from two free-speech organisations (National Coalition Against Censorship and Freemuse) Shakespeare’s plays figure among the 11,851 books banned in Texas prisons, as well as in many US schools and libraries. In Canada, the Public radio, Radio-Canada, revealed, at the beginning of September 2021 that the Providence Catholic Scholar Council, which manages around 30 schools in Ontario, resorted in 2019 to an auto-da-fé (public burning) of 5,000 books for young people, including some Asterix or Lucky Luke comics, “to bury the ashes of racism, discrimination and stereotyping”, of which these books were accused.

In France 'racially un-mixed' think-tanks and workshops have been set up at the University of Paris-VIII, and by the teachers' union SUD-Éducation 93. In March 2019, a play by Aeschylus - 'Supplices' or 'The Suppliant Maidens' - could not be performed at the Sorbonne’s Richelieu amphitheatre, its staging being accused of racialism, and blackface (the use of black makeup on non-black actors) considered as spreading racial stereotypes.

Destruction or vandalisation of statues considered as symbols of the Atlantic slave trade, slavery, colonialism and post-colonialism are frequent, like in those of Christopher Columbus, Theodor Roosevelt, Abraham Lincoln, Cervantes in the US; of Edward Colston, Cecil Rhodes or Winston Churchill in the UK, of Colbert, Josephine de Beauharnais, Victor Schoelder, De Gaulle in France, etc. Activists want to erase this European infamous past and its present scoriae in order to fight against the Western societies’ systemic racism and domination of minorities by the white supremacist ideology.

Language, history, art, music, literature and education should be cleansed of all offences, real or not, present or past, against members of these racial or gender 'minority communities'. New words, euphemisms, periphrases, appear to replace those now deemed offensive. As in George Orwell's “1984”, the idea is to prevent the expression of critical ideas by changing the vocabulary. The word "woman" should be replaced by "menstruating person", "mother" by "parent who gives birth", etc. Periphrases that could be laughed at, if criticising, challenging or mocking them did not lead to a media lynching of the "culprit", or even to the dismissal from his job, because considered an unacceptable transphobic attitude.

And, recently, politics has become involved, with hints of the Orwellian Big Brother. For Humza Yousaf, Scotland's Minister for Justice and a local anti-racism campaigner, words banned in public life should also be banned in the private sphere. His "Hate Crime and Public Order (Scottish) Bill", which aims to defend victims of hate crime based on disability, race, religion, sexual orientation or transgender identity was adopted by a large majority on 21 April 2021. While it abolishes the offence of blasphemy, it does not ensure a balance between freedom of expression and protection against hatred, introducing great insecurity in its application. Offences can now be committed in private, and a system of denunciation is also included for any challenge to the orthodoxy of diversity, such challenges being considered as incitement to hatred. In Spain (the Montero Law) and Italy (the Zan DDL), similar laws are under discussion in Parliament.

However, the end can never justify the means. Especially when, through coordinated actions, through denunciations amplified by the wide resonance offered by social networks, these forms of 'fatwa' make it possible to censor, boycott or publicly humiliate individuals - past or present - whose opinions or behaviour are deemed offensive, embarrassing or judged to be divergent from this new intolerant and belligerent ideology of social-justice; when the weaponisation of social media leads to undermining dissenting voices’ careers or reputations, as hundreds of current cases demonstrate.

The unflinching distinctions between what is right and what is wrong provoke inverse reactions from conservatory citizens or political parties. For instance, in the Czech parliament an amendment to the criminal law that would criminalise social media if they ban content deemed to be in the public interest just passed the first reading. In Poland and Hungary (as in Russia and many other countries) the rights of gender minorities are blithely violated. Racism and hate speech are more frequent and violence is still spreading.

Unfortunately, both extremes contribute to radicalising public debates, endangering our already fragile democracies, fueling an increasingly violent social climate. This is the opposite of what Woke culture and the aim of living peacefully together in diversity should lead to, a luxury that unfortunately only Western societies can still afford.