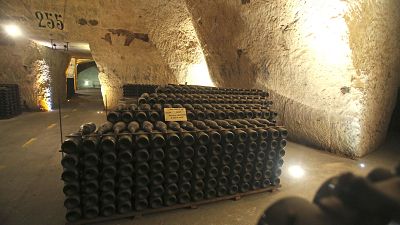 In this Wednesday, Oct. 16, 2013 photo, bottles of champagne are piled up inside the Veuve Clicquot Ponsardin cellars in Reims, eastern France   -   Copyright  Remy de la Mauviniere/AP
By Euronews  with AP  •  Updated: 09/09/2021

Champagne makers on Thursday saw their hopes of winning a legal case against a tapas bar chain grow as the European Court of Justice clarified the bloc's rules for safeguarding products covered by a protected designation of origin (PDO).

The case was initiated by the Comité Interprofessionel du Vin de Champagne — the trade association that represents the interests of Champagne producers and houses — when it filed a lawsuit before a Spanish court seeking to prevent the chain from using the sign "champanillo" on the grounds that the term infringes the protected designation of origin “Champagne.”

The Luxembourg-based Court of Justice said it is up to the Barcelona Provincial Court, which had requested the ECJ to interpret EU law, to decide on the matter. But it made clear that protective designations of origins cover “both products and services.”

“The regulation thus establishes wide-ranging protection which is intended to extend to all uses which take advantage of the reputation enjoyed by products covered by one of those indications,” the court said.

As to whether “champanillo” evokes Champagne, the court noted that the concept of evocation can result from a conceptual proximity.

It noted in its press release that in addition to using the sign “champanillo,” to designate its establishments, the tapas chain also used in its advertising an image of two champagnes glasses filled with a sparkling drink.

“The Court considers that, as regards the concept of ‘evocation’, the decisive criterion is whether, when the consumer is confronted with a disputed name, the image triggered directly in his or her mind is that of the product covered by the PDO,” the court ruled.