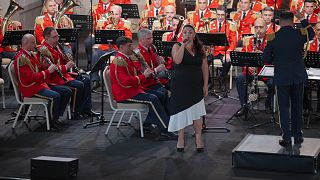 The ancient Azerbaijani city of Gabala played host once again to its famous music festival this summer, after a year’s hiatus due to the pandemic.

It's been an important event on the Azerbaijani cultural calendar since 2009, the 12th edition of the festival took place at the Heydar Aliyev Congress Centre and the Riverside Hotel, nestled in the green hills and tranquil atmosphere of Gabala.

Attended by music lovers from around the region, it was an especially poignant festival this year for performers and visitors alike after it was cancelled last year due to the pandemic.

Zarin Aliyeva, a violinist who performed at the event, said "It was our first live concert for a year and a half. It was difficult for every musician because, for the whole of the pandemic, there were no live concerts. So many musicians are out of practise. Despite this, we pulled ourselves together to perform well. I did enjoy playing in front of an audience and I hope the spectators liked the performance, too."

This year’s festival celebrated the 100th anniversary of the Baku Music Academy, giving young talent and experienced musicians the opportunity to return to the stage and share their passion with a live audience.

On opening night, the atmospheric sound of Azerbaijani folk music filled the air; the shared experience of live music bringing audiences and performers together once more.

Aygun Atayeva was a guest at the festival and was impressed by the architecture and music on offer.

"We’re here at the 12th Gabala Music Festival completely by accident. We are just thrilled by the outdoor concerts and thrilled by the Congress Hall, it’s so amazing here. The acoustics are wonderful, and the musicians and performers, I am just in awe of them."

And for the conductor, Javad Tagi-zade, it was a particularly special occasion.

"This involuntary pause due to the pandemic was like a prank was played on us. We felt some apprehension. We have all missed having an audience very much. We've missed live concerts, not ones on the internet, but when we go out on stage and can hear the audience breathing, we can literally hear their emotions. To hear their applause, live once more is priceless."