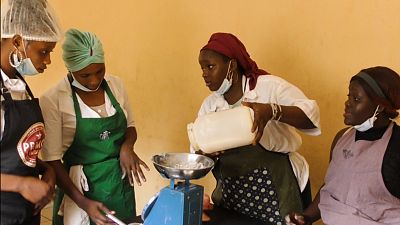 “The Tuaregs came to say that we had to spend the night in that yard so that we could continue our journey in the morning. They wanted to come at night to pick up girls to rape them,” says Fatoumata, 21, describing her journey from Conakry, Guinea, to Algeria where she was planning to take a boat to cross the Mediterranean into Europe.

She is one of few women from West Africa to brave these irregular migration routes.

The routes are dangerous for migrants, but especially women, who can face sexual exploitation and rape on the journey.

While crossing the Sahara desert with people smugglers from local Tuareg nomadic tribes, Fatoumata got lucky. She was protected by a man who walked alongside her.

“Thank God, we were with a Malian whose wife was already in Algeria. When the Tuaregs came to ask for news, the guy said that I was his wife,” she said.

“The Tuaregs knew they couldn't have what they wanted, so they let us go”.

But as she reached Algeria, all her money to make the final crossing through the Mediterranean was stolen. She then had to return home.

In Guinea, she met with a similar kind of stigma that follows men. While men are seen as weak, women are seen as “bandits and prostitutes”, says Fatoumata. Watch the video to learn how the young Guinean is rebuilding her life back home.

If you want to know more about this subject, listen to our podcast episodes in which we tell the story of two men who also embarked on this dangerous journey but with one crucial difference: one succeeded and another failed.

Cry Like a Boy is an original Euronews series and podcast that explores how the pressure to be ‘a man’ can harm families and entire societies. Stay with us as we travel across the African continent to meet men who are defying centuries-old gender stereotypes, and redefining their roles as men.

The podcast is available in French under the name “Dans la tête des hommes”.

Listen to us on Castbox, Spotify, Apple or wherever you listen to podcasts, and don’t hesitate to rate us or to leave a comment.