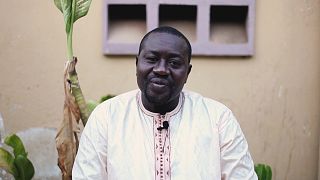 “In the past, men did not want to walk alongside their wives in the streets. It was a disgrace, an atrocious disgrace towards women”, tells Makhtar Aidar, a municipal councillor and a gender equality activist in Pikine Ouest, one of Dakar’s biggest suburbs.

“Traditionally, here, men have to stay with men, women with women, you know? Even in our homes it was like that”.

Things began to change when a group of women called Bajenu Gox realised that men needed… doulas to accompany them through their wives’ pregnancies.

In Senegal, pregnancy and childcare is a "woman's business" to the extent that when a child misbehaves the Senegalese use the Wolof expression "doom ja, ndey ja", or, literally, the child is a reflection of the mother.

Many women in the country have a sort of doula, a Bajenu Gox, or “godmother” in Wolof to help them into motherhood. Usually, but not always, the Bajenu Gox are women who had special training. However, they do not work with men.

Makhtar is one of the first male doulas, known as Nijaayu Gox, or literally “godfathers” in the local Wolof language. 55,000 people live in Pikine Ouest and only 54 participate in the programme. The group’s ultimate goal is to create stronger ties within Senegalese families and prepare men for fatherhood.

The men who become Nijaayu Gox are usually the most respected men in their communities. Quite often, like Makhtar, they have day jobs and, in their spare time, they go from door to door, talking to other men, teaching them seemingly simple things, like joining their wives in their medical appointments.

“Men who accompany their wives to health posts are frowned upon because people tend to think that they are weak”, explains Makhtar, adding that mentality isn’t the only problem that the men face.

“Even at work, if you are absent to accompany your wife, you are punished. So it is important that the men also put themselves in the shoes of the Bajenu Gox”.

According to science, getting men involved in pregnancies not only improves their parenting skills but can reduce maternal mortality. A 2016 study in a community of Northwest Ethiopia showed that fathers who arebetter-informed about obstetric danger signs can prevent these deaths.

The Nijaayu Gox want to extend their network all across the country. They are working with local governments, imams and NGOs to educate their peers. Makhtar feels there is still a lot of work to do, but things are starting to change. At least for the men in the programme.

According to him, the slow shift in the mentality brings families together. “We used to give someone money to take care of our wives' prescriptions for these appointments so we didn’t have to do it”.

“We are also able to understand that it helps a woman if she gives birth to a child in good conditions”.

Cry Like a Boy is a Euronews original series and podcast in which we are travelling to five different African countries meeting men defying centuries-old stereotypes.

For each country, we bring you two narrative episodes - a full reportage on the ground, done in collaboration with local journalists, split into two parts - and two roundtables, bringing together the African and the European perspectives.

Cry Like a Boy is published every two weeks. If you haven’t listened to our previous episodes about the Abatangamuco, a group of former violent husbands from Burundi who decided to change and inspired a whole country, please, do so in the player below.

The "shocking" designs of Elsa Schiaparelli come to Paris