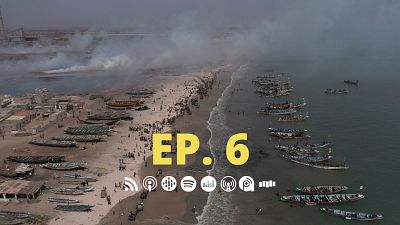 A few decades ago, some Senegalese men openly identified themselves as not male or female, but as an alternative gender - the “Góor-jigéen” or “men-women”. Senegalese society accepted them, and they moved about freely in the streets of Dakar and other towns, dressed as women.

Today, in those very same streets, men seen as behaving effeminately in any way are often harassed or attacked. Nowadays ‘Góor-jigéen’ has become a pejorative term targeting gay men.

Do any Senegalese still remember the time when this didn’t happen? Why did things change?

In this episode, we investigate the colonial roots of homophobia in Senegal. To do this, we travel back in time to when Dakar was known as the “gay capital” of West Africa.

The Cry Like a Boy podcast is hosted in English by Danielle Olavario, and in French by Arwa Barkallah. Our editor in chief is Yasir Khan.

The film you hear at the beginning of this episode is Lamb: La Lutte Senegalaise by Senegalese/Beninese film director and historian Paulin Soumanou Vieyra. You can check more information about his work and buy the film in www.psv-films.fr.

In this episode, we used music by Sahad Sarr, a Senegalese artist, and songwriter, involved in the development of rural populations. You can check out his work at sahadpatchwork.com. Additional music recordings by Bruce Miller.

In the next episode, we will have a conversation about coming out of the closet in conservative societies. We will also talk about gender roles and homophobia with two LGTBIQ rights activists: Youssef Belghmaidi, a Moroccan trans woman activist based in France, and Sheba Akpokli, an LGTBIQ+ rights activist, and a lawyer, from Togo.

Make sure you listen to our next episode, which will be published on Thursday, January 21st.

If you speak French, listen to the French version of our podcast. It is called Dans la Tête des Hommes. In the next episodes in French, we will talk to two Senegalese living in Europe: lesbian activist Marame Kane, and writer Mohamed Mbougar Sarr, author of De Purs Hommes (Pure men).

If you haven’t had a chance to listen to the previous episode, please give it a try. In it, we told the story of Junior, a young Senegalese man, who lives with a secret that he has kept from his family and his closest friends, for fear of not only rejection but persecution and even imprisonment. The secret is that Junior (not his real name) is gay.

Cry Like a Boy is an original Euronews series and podcast that explores how the pressure to be ‘a man’ can harm families and entire societies. Stay with us as we travel across the African continent to meet men who are defying centuries-old gender stereotypes, and redefining their roles as men.

TRANSCRIPT | THE GÓOR-JIGÉEN IN SENEGAL: THE PAST - EPISODE 6

Danielle Olavario: We are at a Senegalese wrestling fight on a beach in Dakar. The men bend as they struggle to fight.

Hands forward, legs back. They start by slapping each other’s hands. Necks snap together. With their fists they try to hit the chest.

The belly. The chin. Blindly. Because they have their heads stuck together. It's combat, but it's also a kind of choreography.

Senegalese wrestling has become popular since 1914. Sociologist Djibril Seck argues that it was a tool for recovering native African masculinity, wounded by colonisation. During colonial times, popular European representations of African men were feminised and infantilised.

But in the arena, the African warrior was back. Strong, muscular, narcissistic, and stoic in the face of pain. And of course, free of any feminine attributes.

Welcome to Cry Like a Boy. I am Danielle Olavario and this is the second part of our documentary on the góor-jigéen in Senegal. If you haven’t yet heard part 1, take a listen on euronews.com/special/cry-like-boy-podcasts

In our previous episode, we met Junior, a 24-year-old Senegalese who lives with a secret. A taboo in Senegalese society.

As a young gay man, he lives in fear of being called Góor-jigéen, a "man-woman”; as they are pejoratively called in the local Wolof language. But it wasn’t always that way.

Junior: “Góor-jigéen before meant something different, because they were men who dressed like women and talked like women according to the research I've done.”

Danielle Olavario: So how was the situation before? What changed?

Michael Davidson: “In 1949, Dakar was already the “gay” city of West Africa. When I returned nine years later, the French rulers had gone, and Dakar was gayer than ever… For some reason, buried in history and ethnography, the Senegalese […] have a reputation in all those regions for homosexuality, and in Dakar, one can quickly see that they merit this reputation.”

Danielle Olavario: This is an excerpt from the travel essay by English journalist Michael Davidson. He published it in 1970, but it reflects his experiences in his visit to the West African country between 1949 and 1958.

Senegal became fully independent on August 20th, 1960, after centuries under the French colonial rule. So when Davidson was traveling, the country was still a colony.

He wasn’t the only one to observe that the streets of Senegal were particularly welcoming to gender diversity.

Danielle Olavario: Let’s now go deeper. Let’s look a little further back through the words of another English anthropologist Geoffrey Gorer who wrote this in 1935.

Geoffrey Gorer: “They are called in Wolof men-women, Góor-jigéen, and do their best to deserve the epithet by their mannerisms, their dress, and their make-up; some even dress their hair like women. They do not suffer in any way socially... on the contrary, they are sought after as the best conversationalists and the best dancers.”

Danielle Olavario: In his time, the Góor-jigéen, men-women, were integrated in the Senegalese society.

Senegalese culture didn’t just tolerate them but accepted them as an important part of the community. They had a prominent role in life's ceremonies, such as weddings and baptisms. They also often accompanied high society women and had an influential political position.

That memory is still there somewhere. Not only in studies, diaries, and books. Some Senegalese people like Professor Mbaye still remember it.

Babacar Mbaye: “When they were dancing, everybody was just crossing their arms. And that's in all watching. You see what nobody was turning their eyes away. You see, you know, and when those individuals walked by, you, you know, as a boy, I dare not, I did not, do anything to insult them. I did not laugh at them because we considered them our fathers, you see. We considered them like our fathers, that we gave them the same sense of respect that we gave to our fathers and our uncles.”

Danielle Olavario: Like the Góor-jigéen in Senegal, we can find examples of people who don’t identify with the category of woman or man throughout Europe.

Historical examples of such figures include il femminiello who, just like the Góor-jigéens, played an important role in ceremonies such as weddings in the 19th century in Naples, Italy.

And some still very current, such as the “sworn virgins” from Albania. Born women but who decide to live like men. They are accepted only if they take a vow of chastity for life. Some do so to live more freely or to be able to provide for their families.

So what we’re seeing in Senegal is a transformation of the term ‘Góor-jigéen’ from meaning gender fluid, or a third neutral gender, to meaning a pejorative term, strictly for gay men.

Today this nuance is lost, as French researcher Christophe Broqua from the French National Centre for Scientific Research explains here:

Christophe Broqua: “They were considered to be men with feminine attributes. But the expression said nothing about their sexuality.”

Danielle Olavario: What’s more, Cheikh Niang, a Senegalese Professor of medical and social anthropology at Cheikh-Anta-Diop university, says that the creation of these kinds of taboos is rooted in colonial influence:

Cheikh Niang: “They took it from the colonial laws. And in the colonial laws, you have all these homophobic dispositions. The laws that you find in the texts and in Africa were not invented by Africans. It came as a result of the introduction of these same laws. We just copied and pasted. We extended laws that existed during colonisation.”

Danielle Olavario: Colonisation has represented a step back in respecting gender diversity and identity. And, in time, it created a void in the historic memory of the Senegalese.

Fast forward almost a century, we are back in 2020. Back in the streets of Dakar at rush hour. People here cannot freely experience their sexuality.

Everyone who is sexually diverse tends to hide it, because they’re afraid of punishment. The slightest hint of a female attribute in a man is seen as outrageous.

Christophe Broqua: “There is a well-known Senegalese artist, Waly Seck, who was wearing a handbag in a clip and in photos. That was considered too feminine and he was extremely stigmatised for it. He even had to destroy it publicly at a concert to end the controversy.”

Joey: You think I should give up the bag.

Rachel: Wait Joey I’m sorry. As terrific as I think you are with it…

Rachel: I just don’t know if the world is ready for you and your bag.

Danielle Olavario: In societies around the world, in many languages, there are words to demean those who do not fit into traditional male or female patterns.

Danielle Olavario: In Senegal, the word is Góor-jigéen. A word Junior has probably heard many times. But deep down, this word cannot hurt him.

Junior: “Yes, being gay and masculine is possible.”

Danielle Olavario: He knows his sexuality doesn’t affect his masculinity. Neither does the tone of his voice, his way of dressing, or his hairstyle. He says he is a proud man.

Junior: “I have always lived my masculinity naturally because I played with my friends. I did everything that everyone else did was no different. Do you sometimes wonder when you tend to listen to the radio or TV, or even hear people talking? You can ask yourself questions, but it's only for a few minutes. After that, it passes. You move on because it's your life and you are the only one concerned.”

In this episode, we used music by Sahad Sarr, a Senegalese artist, and songwriter, involved in the development of rural populations. You can check out his work at sahadpatchwork.com.

Special thanks to our producer Natalia Oelsner for collecting the music for this episode. Our editor in chief is Yasir Khan.

The film you hear in the beginning of this episode is Lamb: La Lutte Senegalaise by Senegalese/Beninese film director and historian Paulin Soumanou Vieyra. You can check more information about his work and buy the film in www.psv-films.fr.

For more information on Cry Like a Boy, a Euronews original series and podcast, go to euronews.com/programs/cry-like-boy to find opinion pieces, videos and articles on the topic. Follow us @euronews on Twitter and euronews.tv on Instagram.

Share with us your own stories of how you changed and challenged your view on what it means to be a man. Use #CryLikeaBoy. If you’re a French speaker, this podcast is also available in French: Dans la Tête des Hommes.