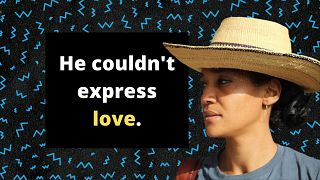 “The first act of violence that patriarchy demands of males is not violence toward women. Instead patriarchy demands of all males that they engage in acts of psychic self-mutilation, that they kill off the emotional parts of themselves. If an individual is not successful in emotionally crippling himself, he can count on patriarchal men to enact rituals of power that will assault his self-esteem.”

As a young girl growing up in Ghana I became friends with my neighbour, let's call him Frank.

The first time I saw him, his mother was carefully wrapping him in a heavy, hand-woven, brightly coloured Kente cloth. His pubescent muscular arms carried the robe, creasing it in just the right places. His soft eyes gazed into the distance, trying to harden. He looked regal. This was the first time Frank was presented to me, almost as an object: MAN. We celebrated together. The boy did not yet fully comprehend that the weight of that Kente cloth was only a portion of the weight of the responsibilities and the grappling with complex emotions that was to come.

Frank's mother struggled to make ends meet. His father was completely absent, and Frank could not stand to see his mother sacrifice and suffer. She did her best by cutting corners and limiting his options, in case she could not afford them. He dreamt of making money. That would make him a successful man. It was how he thought he would end the suffering.

In search of a better life, Frank migrated from Abidjan to Accra, where he worked in construction. There, he met a young lady who understood him. Her name was Mercy. They fell in love. They made plans. He wanted to be an honourable man. A provider. His mother would tell him, in rare conversations, “Frank, you have to be a man!” Frank always confidently obliged, never admitting he didn’t understand what it meant. He was in love but had no idea how to express it. There were tender boys in our neighbourhood, who seemed comfortable being affectionate with each other. We knew they were gay. Frank secretly yearned to have this type of intimacy- a non-sexualized comfort among men. But he was also appalled by it. Frank had dreamt of leaving and returning a wealthy man who could take care of people's needs.

His mother would tell him: “Frank, you have to be a man!” Frank always confidently obliged, never admitting he didn’t understand what it meant.

Through deals with a “connection man,” Frank spent his savings on fake documents and a ticket to Germany. Just as he was leaving, his by-now wife, Mercy, announced she was pregnant. He was overjoyed. He had a clear purpose as he went to Germany: to work hard, and support his family. But once in Germany, Frank, the gentle giant, was alone, and spent months in shameful tears. He was in a strange country, living in constant fear of being deported and losing everything. With time, he settled into a job, got a drivers license, and an apartment of his own. He also found himself a girlfriend who could keep him company during his loneliness.

5 years later, when he had saved up enough money, he travelled back to Accra, to reconnect with his family and finally meet his daughter. He was disappointed to hear the gossip. Mercy had had affairs in his absence. How could she betray him like this? Surprisingly, no one questioned his fidelity. He began to beat Mercy in her own home. He felt powerful and free as he slapped, kicked and punched her in the face. Her family stood by and watched this happen. They believed she deserved it. He wept as he recounted his loss of control. After his short dramatic visit, Frank returned to Germany. Rejected by her family, Mercy sat at home, alone with her child, a swollen face and the missing tooth that would always remind her of Frank.

He felt powerful and free as he slapped, kicked and punched her in the face. Her family stood by and watched this happen.

Mercy was forever changed. She wanted to be a second wife. A first wife clearly needed to deal with too much frustrated male drama, and would be in the spotlight of a judgmental society. A first wife needed to accept the double standards. A first wife needed to deny her own needs and accept and submit to the boundless needs of a man. A second wife, however, might have to accept less societal respect and status. In return, she could have control over her own life. As a second wife, she would only deal with the slipstream of the exasperated emotions of men. Mercy felt she had cracked the code to her liberation! She had discovered how to negotiate her boundaries and freedom in a relationship with a man in Accra. While sometimes lonely, she felt free as the second wife of a man named Kofi. They have 2 children, which seals their deal.

Today Frank lives in Germany. He works long hours in a factory. He is underpaid and invisible. He is stuck in a string of transactional relationships with women. The world around him is changing. He successfully negotiated with Mercy to bring his daughter to Germany, where she now goes to school. She comes home with stories about women taking the lead in decision making. She shares her dreams of taking up the most influential public leadership positions when she returns to Accra. He is supportive and admires her grit. But I wonder what he teaches her about men.

According to a 2020 UNDP report called the Gender Social Norms Index which surveyed 75 countries representing 80% of the world's population, 28% of the respondents believe it is acceptable for men to beat their wives. While at the same time, we all learn, at some point in our lives, that we cannot solve problems with violence. Men are often exposed to pervasive violence, from a young age, sometimes as a way of asserting their masculinity. This assertion has immense destructive power.

Ama van Dantzig, is a Ghanaian-Dutch social entrepreneur and creative thinker based in Amsterdam. She divides her time between Accra and Amsterdam, thinking about systems, connecting dots and building bridges between the two continents. She is co-founder of Dr. Monk, an international research and ideation studio tackling issues on global inequality and sustainability. Van Dantzig is also a speaker and moderator on a broad range of topics including social change, sustainability, gender, the arts, Africa and the world.