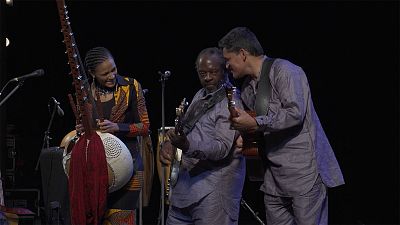 The Winter International Arts Festival in the Back Sea resort of Sochi broke boundaries by fusing different music genres and art forms.

This year’s festival featured a full program under the leadership of Russian violinist and conductor Yuri Bashmet as artistic director.

A highlight of this year’s opening was a one-man musical play, Don’t Leave Your Planet, based on Le Petit Prince by Antoine de Saint-Exupery.

One of Russia’s most prestigious actors, Konstantin Khabensky, played the stranded pilot.

“This is a story of someone who sees life as very spiritual. This (play) is an honest conversation of a person with himself, a person who is in the desert and on the edge between life and death.”

Bashmet told Cult he did not always envisage a career in classical music.

“When I was young it was The Beatles, and I played and also tried to sing them. I played guitar and I had a band.”

The opening gala concert featured the world premiere of a composition for orchestra and traditional opera voice with the Sweden-based Chinese singer Xiangping Xiao.

It’s a great pleasure to make music with someone who sends out this warmness."

Clara-Jumi Kang, a German violinist of South Korean descent, has worked with Bashmet for many years.

“I grew up with his music and he is an incredible adoring person, he is very human, it’s a great pleasure to make music with someone who sends out this warmness."

Swiss trombonist David Bruchez, who teaches at the Zurich University of the Arts, shared some of his secrets.

“We always say that you have to sing in your mind, then this goes through your lips in your instrument. That’s why I always sing and even when I am playing the trombone I am singing.”

Singer and composer Sona Jobarteh from Gambia thrilled the audience with ethnic music played on a 21-string African harp known as a kora.

Jobarteh is renowned as the world’s first female kora virtuoso. The instrument is usually passed down exclusively from father to son in griot families. The term “griot” refers to West African historians, storytellers, praise singers, poets or musicians.