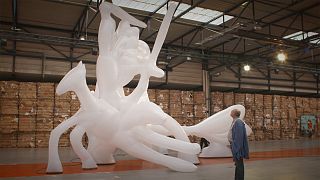 One of Europe's leading contemporary art events, the Lyon Biennale, moves into uncharted territory for its 15th edition – the former Fagor-Brandt factory, which closed in 2015.

The team at the prestigious Palais de Tokyo in Paris were this year's guest curators, attracted by the immense possibilities of the 29,000 square-metre venue.

Vittoria Matarrese, curator at the Palais de Tokyo, told Cult : "We really wanted to create the experience of crossing a landscape. So we began to imagine a landscape - not just a natural landscape but a landscape that was also economic, social, historical, political, bacteriological, going from the miniscule to a more cosmogonic scale."

“I like to use the formula trans-media, trans-genre, transgender, because I am also transgender, and in my paintings I try to always mix the different genres and media," Scheirl says.

The duo also explore the dark side of gentrification and our value system, with Knebl putting the case for “a completely new order of society in future”.

Another installation, Prometheus Delivered, brings science and art together.

It's a marble sculpture portraying the bound Prometheus being slowly devoured by stone-eating bacteria.

Artist Thomas Feuerstein explains how the rest of the myth plays out in his installation.

"The punishment was every day an eagle comes and eats the liver of Prometheus and the liver was the symbol for the future. I wanted the scientists of the medical university in Austria to produce, to create a new liver for my Prometheus and they succeeded and did a special 3D sculpture grown from human liver cells."

As well as the giant former Fagor-Brandt factory, the Biennale takes place all over Lyon, in the city centre and in the Museum of Contemporary Art.

French artist Karim Kal exhibits a series of photographs from a young offenders’ institution in Meyzieu, on the outskirts of Lyon.

The images are stark but document tiny details of prison life.

"The idea is to adopt the point of view of the prisoner,” Kal says. "Here we have a portrait of one of the guards done by one of the prisoners in biro and also you have the glass that is broken because of the practice that is widespread in prison environments of slamming their windows to show their discontent."

Adding to the starkness, the photographs were taken at night, with a powerful flash and a fast shutter speed which made the background absoutely black.

Works from more than 50 artists from around the globe are on show - most of them world premieres.

Last year the Biennale saw more than a quarter of a million visitors.