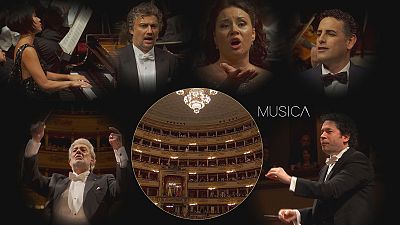 Rousing melodies, touching duets and breathtaking arias: The classical music world's greatest, unite on one stage at Milan’s La Scala for the Rolex Ambassadors Gala accompanied by none other than the Vienna Philharmonic, under the baton of legends.

"It's great to be in the place where Verdi was, history is still here, tradition is a still here, also with the Vienna Philharmonic you know that is a family," added Gustavo Dudamel, Conductor.

"A FESTIVAL AMONG FRIENDS"

Daniel Froschauer, Chairman, Vienna Philharmonic said, "For me, it's a festival among friends on the highest level."

Michael Bladerer, Managing Director, Vienna Philharmonic said, "All together we have tried to draw an arc from the most famous Italian composers, Donizetti, Verdi, Puccini to also the French repertoire like Gounod."

Sonya Yoncheva, Soprano said, "We never never ever sang together and Roméo and Juliette already is a beautiful story. I didn't sing it for a very long time now so for me it's exciting."

"Una furtiva lagrima (A furtive tear), of course, is a fantastic aria. it's a very naked aria. There's only a harp and some instruments, very piano. People are crying sometimes," commented Juan Diego Florez, Tenor.

Yuja Wang, Pianist said, "First time I was in La Scala was probably a decade ago and it was just magical because of its history and I mean my idol is Maria Callas."

WHAT DOES LA SCALA REPRESENT?

Placido Domingo, "A must for a singer."

Sonya Yoncheva, "The cathedral of the operatic art."

Gustavo Dudamel, "The place where all the greatest were, Toscanini, Callas, Pavarotti."

The gala is in aid of the educational activities of the opera house’s academy.