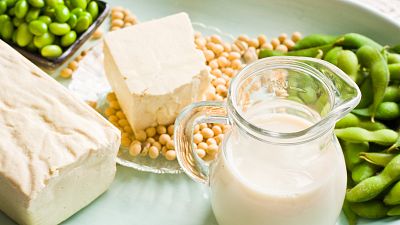 There's a lot of misunderstanding in nutrition. One day a food is good, and the next day it's bad. Perhaps the food with the greatest misconceptions is soy. As a nutritionist, I see this in my own practice when I recommend soy-based foods as meals and snacks. My patients will either give me a look of fear, or a negative statement that has little evidence behind it. The truth is, not all soy foods are equal. Here are the facts you need to know about soy.

Soy is a legume, originally grown in parts of Asia.

Is soy good for you?

Yes, but it depends on the type. A review of the data on soy shows that whole soy sources, coming from edamame, tofu, miso and tempeh may have multiple benefits to health. Soy protein may help to reduce bad LDL cholesterol, may play a role in bone health, may help with renal function and may minimize symptoms of menopause such as hot flashes.

Despite the data, the consumption of soy during breast cancer treatment is still controversial and more data reviewing the interaction between the isoflavones and the breast cancer treatment option tamoxifen is still needed. Additionally, further research on women who are high risk for breast cancer and soy consumption may also be warranted. Bottom line through — the evidence for soy in the diet, as a beneficial component to breast health, is strong and there is no reason to give up whole soy sources before talking to your doctor or dietitian first.

Though isoflavones are one of the greatest benefits of soy, it's the protein that food manufacturers love the most. The problem is, they alter the protein so significantly that it can become unhealthy.

Soy protein is the protein found in whole soy products and is considered a complete protein since it contains all the amino acids necessary for optimal nutrition. That makes soy protein closer to animal protein than other plants and it's the reason why it's such a popular option for vegan burgers, hotdogs, ice cream, cheese, chips, bars and protein powders.

Though products rarely contain pure soy protein. Instead, they contain soy protein isolate (different from whey protein isolate or milk protein isolate), an ultra-processed form of soy that isolates the protein from the soy food. It leaves all other nutrients (like isoflavones, healthy fats and fiber) behind with the plant, and in the end, doesn't really resemble the whole food it came from. The extraction process in which the protein is isolated may also involve the use of chemicals like hexane.

Soy and soy protein isolate are not the same. If your goal is to eat more plant-based protein, going with the whole forms is the best approach.

Is soy bad for men?

Though moderate consumption of soy for men is most likely healthy, and may help to reduce the risk of prostate cancer (especially when soy and tomato products are eaten together), and potentially play a role in the prevention of heart disease, there could also be a "too much of a good thing" side of the coin as well.

A 2008 study found that men who ate 1/2 serving of soy every day had lower concentrations of sperm than men who didn't. Similar to other areas where soy is vilified, we need more data to come to a conclusive agreement on the role that soy can or can't play in a man's life.

What is soy milk?

Though the processing of soy milk varies between manufacturers, the basic steps to make it are similar. The process involves mixing and blending soaked soybeans with water and draining the liquid into a milk form. It can easily be made at home, but many consumers take the more convenient move to purchase it at a store instead.

A new study found that soy milk is a more nutritionally dense option than other milk alternatives due to its high protein and phytonutrient content. Soy milk may also be a good alternative for individuals who can't have milk but still want the calcium; as some soy brands fortify with this important bone-building mineral. Look for soy milk options that have no added sugar or other additives and above all, make sure the source comes from whole soybeans, not from soy isolate.

The dangers in the American diet come from many sources — plants are not one of them. Though soy is controversial, the fears that many individuals have are usually not backed by credible science. Soy, in its whole form, is a healthy component to a whole foods diet. After all, some of the healthiest communities on the planet make whole soy a staple on their plate.

You can make your soy consumption even healthier by buying brands that list their product as organic and non-GMO. This is often a recommendation I make to my patients since an alarming amount of soy produced in the U.S. is genetically modified.

You can find joy in soy. As with many things in the diet, going back to the basics, eating moderate amounts, and choosing forms that are closer to the earth, and further from the lab is always what your body prefers.

In Japan, Miso is known as 'food for the soul'