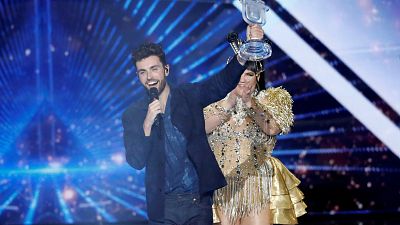 The Netherlands has won the 2019 Eurovision song contest.

Duncan Laurence, 25, was the bookies' favourite heading into the final. His track "Arcade" was awarded 492 points from the 41 countries participating.

The last time the Netherlands won the contest was in Stockholm in 1975 with "Ding-a-Dong!

Italy came second with 465 points and Russia was third with 369 points. Sergey Lazarev, who represented Russia, also finished third in 2016.

The Eurovision Grand Final 2019 was an evening filled with the obligatory sequins, power ballads, and of course this year the queen of pop, Madonna, graced the stage.

Here is Euronews' pick of the top performances from throughout the competition.

Zala Kralj & Gašper Šantl of Slovenia put in an understated performance, with some on social media saying the couple "stared at each other for three minutes straight".

Iceland brought plenty to the table... fireworks, shouting, PVC and an iron mallet.

They also dropped in a politically charged message as the results were announced, holding up scarves that read "Palestine" with the Palestinian flag on it.

Kate Miller-Heidke from Australia donned a towering dress for her performance of “Zero Gravity”, which drew comparisons to

If she'd won tonight, then Australia would've had to designate a host country in Europe and she had said it was between Paris, London and Berlin.

Laurence said: "Here's to dreaming big, this is to music first, always."

5) Denmark - a track in English, French, German and Danish

Catch up on Eurovision this week

Hit the links below if you want to get up to speed on all the Eurovision news from before the competition.

What do our journalists think of their countries' chances? Euronews journalists give their take on this year's music extravaganza

Who are the contenders? All this year's entries and their chances of winning

Relive the highs, and lows (which are quite often the same thing) of years gone by with the best of the worst of Eurovision

And for your own warm-up, take our quiz... Are you a true Eurovision fan?

Eurovision takes place around Shabbat—how will this work in Tel Aviv?