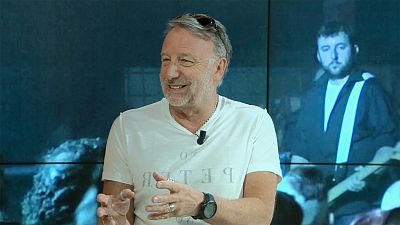 It has long been hailed as one of the best albums of all time, and, in June, Joy Division's 'Unknown Pleasures' will celebrate 40 years since its release.

The band's bassist and co-founder, Peter Hook, gave Euronews an exclusive interview, where he reflected on their early beginnings, the death of Ian Curtis, and how they became pioneers of the punk-rock movement.

'Unknown Pleasures' was Joy Division's first studio album, and marked the beginning of a story that is still being told today.

But, Peter Hook explained how he did not initially like the album when it was first released.

"Bernard [Sumner] and I weren't very happy with the production. We thought it was too old for us. Too good for us. We wanted it to be very punky like The Clash or the Sex Pistols," he said.

"We didn't make the album to be iconic. Certainly not 40 years later."

But, at the time, all Joy Division was thinking about was their next concert and making new music.

The band were happy and confident, but their music soon became overshadowed by other issues.

The health of lead singer Ian Curtis was declining, due to his severe epilepsy, which caused him to have serious seizures while performing.

He also suffered from mental health problems, alongside his turbulent personal life and the pressure of the music industry.

"I watched Ian and I couldn't help him," Peter Hook said.

"We have all that survivor's guilt that we have to live with all the time because of what happened. Even though we were very young and there were much older people, much more educated people, experts looking after him. If they couldn't look after him, why would three 21-year-old idiots think they could look after him?"

Everything changed from then on. Joy Division disbanded and a new band was formed - New Order.

New Order's new, but familiar, style combined Joy Division's famous punk-rock feel with electronic and dance music, leading to them becoming one of the most influential groups of the 1980s.

The new band achieved enormous success, however an alleged rift in the group led to Peter Hook leaving in 2007.

But, in 2009, Hook decided to celebrate 30 years of 'Unknown Pleasures' and the legacy of Joy Division and Ian Curtis.

"Ian Curtis' shoes were very big shoes to fill. The expectation was high and I was scared to death, but I had to do it otherwise it was back to DJing," he said.

And now, 10 years later, it's time to celebrate 40 years, with a limited edition 40th anniversary version of the classic album. It will be pressed on a red vinyl and will feature an alternative white sleeve, as a call back to the now-iconic design, which was inspired by audio waves.

In 2008, Peter Hook formed Peter Hook and The Light, with his son and two other musicians who he played with as part of Monaco, one of his previous groups.

The band regularly covers Joy Division and New Order songs, and in May 2020, they will play the full 'Unknown Pleasures' album at two special shows in London and Manchester.

"Ian Curtis in particular had a great ambition for the group around the world. Not only in Manchester, nor England. He had an ambition to take Joy Division music everywhere because he was our biggest fan," he said.

"I do feel that by doing what I've done I've actually fullfilled that ambition for him. I think he would be very proud of that. To be able to go and play in Mexico, Portugal, Brazil, Mongolia, as we did. To go to all those places to play music that I love and helped create with others.

"It's just such a wonderful, wonderful feeling. I mean, this is a great job."