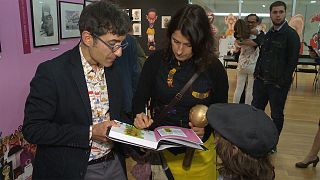 Drawings dripping with satire went on display at the World Press Cartoon in Portugal, as artists took on themes including politics, global warming, immigration, and Brexit.

The exhibition opened on May 4 in Caldas da Rainha, after an awards ceremony.

The winners of the Grand Prix, with prize money of €10,000, were Javier Carbajo and Sara Rojo, with their caricature of Syrian President Bashar Al-Assad.

Ms Rojo told Euronews that the work was a joint effort between the two artists, something that is rare in the cartoon world.

"It's not normal. People usually do it alone, but we like to work together, we used to work on other projects together. This caricature, in particular, we have a lot of time to do it, and it's a personage that interests us personally," she said.

Overall, more than 900 works, published in the press of 68 countries, participated in the competition.

Themes ranged from the relationship between Donald Trump and Vladimir Putin, to the death of Saudi journalist Jamal Khashoggi.

There was also a large focus on the environment and climate change, as WPC director António Antunes told Euronews.

He said: "Pollution, ecology, global warming - which are different sides of the same coin - are increasingly present. These cartoons represent an increase in the sensitivity of the general population and cartoonists as well. Then, we have the classical subjects like Trump, Putin, that mark the political agenda very much - and that is reflected here in the exhibition."

Charged with judging the entries was a jury of international cartoonists, including Maria Picassó, Óscar Grilo, Cássio Loredano, Manuel Peres and António Antunes.

They awarded the first prize in the 'Editorial' category to Ramsés, whose cartoon was about Cuba.

"With the changes that are occurring, that is why I had the idea of putting Cuba in the garage, the workshop. They are working, they have not finished yet. There are many generations working to improve our country, our beloved island," he said.

He told Euronews it was an apology for siestas.

"This is a drawing apparently only of humour, but it quite reflects the society in which we are living. I try to compare the human being with technology, with mobile phones, that sometimes needs a recharge of 10 minutes to continue. We also need a break. "

The World Press Cartoon will be at the Cultural and Congress Centre of Caldas da Rainha until 28th July 2019.