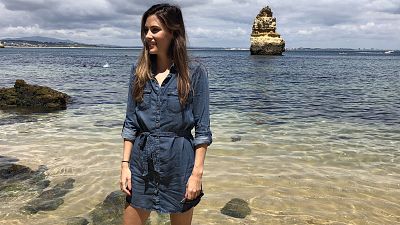 Bailey Jean Matheson, seen here in Portugal, traveled the world after her cancer diagnosis. She wrote her own obituary before dying at 35.   -   Copyright  Courtesy Julie Carrigan
By A. Pawlowski  with TODAY Health and Wellness  •  Updated: 17/04/2019

So begins Bailey Jean Matheson's obituary, which she carefully wrote herself before dying of cancer this month at 35. The woman's upbeat tone, young age, poignant life advice and warm messages to her loved ones are garnering lots of attention in her native Canada and beyond.

"Don't take the small stuff so seriously and live a little," Matheson urged others in the missive, which was accompanied by her smiling photo.

She thanked her parents for giving her "the greatest gift" by supporting her decision not to go through chemotherapy and letting her live the rest of her life the way she wanted.

"I know how hard that must have been watching me stop treatment and letting nature take its course. I love you both even more for this," Matheson, who was an only child, wrote.

She also expressed her deep gratitude to her friends.

"I've always cherished my friendships more than anything because I've never had siblings of my own," Matheson wrote. "I never thought I could love my friends more than I did but going through this and having your unconditional love and support you have made something that is normally so hard, more bearable and peaceful."

"She said, 'I don't want it to sound like a normal, boring obituary. I want it to be a message to everybody I loved,'" Julie Carrigan, who had been friends with Matheson for a decade, told TODAY.

Matheson, who lived in Halifax, Nova Scotia, had been very healthy and active, but started complaining about stomach pain, said her boyfriend Brent Andrews. The couple met on a dating app in the fall of 2016, three months before her cancer diagnosis, which Matheson playfully references in her obituary: "To my Brent… you had no idea what you were getting yourself into when you swiped right that day," she wrote.

Doctors were stumped by her symptoms, attributing the stomach pain to muscle or back problems. But when Matheson felt a lump on the left side of her abdomen, an ultrasound and a biopsy finally revealed what was wrong. In January 2017, Matheson was diagnosed with leiomyosarcoma, a rare cancer that affects smooth muscle tissue.

The exact cause of leiomyosarcoma is unknown, according to the National Organization for Rare Disorders. "It's like [winning] a bad lottery," Carrigan said.

There was hope doctors could remove the tumour after a round of radiation, but the treatment failed to shrink it and the surgery was deemed too risky. Matheson was given two years to live, Andrews said. Chemotherapy was an option, but it likely wouldn't have saved her life. Fearing the brutal side effects, Matheson declined the treatment.

"She was worried that those two years — if she was going through chemo — her quality of life during that time wouldn't be very good, so she just went for it and did a lot of stuff that she really wanted to do," Andrews said.

She travelled to 13 countries, including the U.S., Ireland, England, Norway, Croatia, Montenegro, St. Lucia, Mexico, France, Morocco, Greece, Portugal and Spain. She got to see Coldplay, her favourite band, in concert, twice.

"She knew she had limited time so she was able to do so many things she wanted to do," Andrews noted, calling her the most considerate and amazing person he'd ever met.

Matheson died on April 5. She'd been getting counselling at a local cancer centre during her illness. After she passed away, Andrews called to make an appointment for himself because he needed to talk. It turned out Matheson had already made arrangements for her counsellor to call him. She wanted to make sure he'd have someone to talk to about his grief.

"I couldn't have asked for a better man to be by my side for all the adventures, appointments, laughs, cries and breakdowns," she wrote in her obituary.

Matheson would have been both mortified and touched to know her last words are getting so much attention, her friends said. She'd be happy if it inspired others to make the most of their time the way she did, they added.