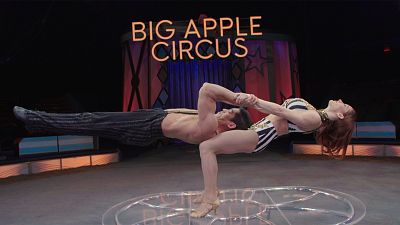 Some people call Virginia Tuells the strongest mom in the world.

She says she's just a regular mom — although, yes, she does regularly lift her muscle-bound husband in the air for their circus act.

The real strength, she says, is in the balancing act that every mom performs. That's what makes her proud. When the circus performers greet the audience after the show, a crowd quickly gathers around Virginia, 38.

"When they see me in person they say, "How can you do that? You are such a small girl.' And I say, "Yes, women, we have power."

Giovanni smiles. He's used to it. He grew up in Cuba, raised in a household led by strong women. Virginia says perhaps that is why, when they were young circus performers creating their act, Giovanni recognized the strength in her.

Their act evolved from a traditional "strong man lifts and balances the woman" routine into something that few audiences have ever seen before: In the showstopper, tiny Virginia, barely topping five feet and 100 pounds, lifts her 5'6", 150-pound husband over her head as he balances in a handstand.

They honed their act over the years, to the beat of a sexy tango. It's all about romantic tension, synchronicity, strength, grace and balance — and then along came Sophia, their baby daughter, born on Christmas Eve, 2017.

These days, Virginia breastfeeds Sophia backstage precisely three acts before hers; with her belly full, Sophia drifts off to sleep with circus friends watching over her as Mommy and Daddy perform their feats of strength.

Giovanni thought he knew what strength was, and knew more than anyone how strong his wife is. Then he watched her go through 48 hours of labor with Sophia, including five hours of pushing (yes, five!). Virginia wanted to avoid a C-section if she could, so Giovanni kept asking the doctors for 15 more minutes.

"I trust her with everything," he says. "And I know, Virginia is strong."

Giovanni is from Cuba and Virginia grew up in Argentina; with their own extended families far away, it's just been the three of them figuring out life together — with help from their circus family.

"When you're in the circus you are, like, in a small town," Virginia explains. The performers' children run between their trailers and play in the dressing rooms together. Everyone wants to babysit little Sophia. After performances, all the families might gather for pizza. Giovanni, she says, is a modern dad: He cooks, he cleans, he takes care of Sophia just like she does (except of course for the breastfeeding).

"I am very lucky because Giovanni is helping me a lot. And I think he's lucky too," Virginia says with a light laugh. "It's both of our responsibility to do everything at home."

Virginia and Giovanni perform as Duo Fusion with the Big Apple Circus; after a homestand in New York City's Lincoln Center, they're at Washington, D.C.'s National Harbor through March 24, then Peabody, Massachusetts in April and May, and Philadelphia in May and June.

Working together as husband and wife has its challenges. It's not like one of them can storm off to the office after a fight. Five days a week, they have a date in the spotlight, where each literally lifts the other and one wrong move could injure them badly.

No matter what stress might weigh on their minds any given day, they find their focus, and each other, in their act. They have a secret signal, one that the audience never sees: a silent hand squeeze.

It means: Back to center. Focus. I've got you.

And they've both got Sophia, watching her mom and dad with big dark eyes. Every night the family-friendly circus is packed with children a little older than Sophia, and Virginia thinks about the message she's sending to those little girls and boys.

"She can lift him up," she imagines them thinking. "She can do everything she wants."