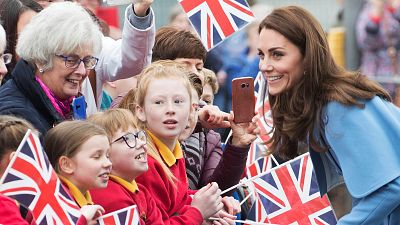 Britain's Catherine Duchess of Cambridge is seen on a walkabout outside the Braid Centre in Ballymena, Northern Ireland February 28, 2019.   -   Copyright  POOL Reuters
By Ree Hines  with TODAY Lifestyle  •  Updated: 01/03/2019

It's been just 10 months since Prince William and Catherine, Duchess of Cambridge, welcomed their third child, Prince Louis,and fans of the family are already eager to learn if little Louis will ever be a big brother.

In fact, on Thursday, one royal watcher had the chance to ask to the former Kate Middleton that question — and he even got an answer!

The royal couple were busy meeting and greeting the masses of well-wishers who gathered to see them on the second day of their surprise trip to Northern Ireland, when the duchess stopped to smile and coo at a baby she spotted in the crowd.

The father introduced her to baby James, who she dubbed "a very sweet boy" before asking how old the wee one was.

"Five and half months," dad told her.

"Aw," the duchess said as she held James' hand. Then she confessed, "It makes me very broody."

That's when the man asked the question on everyone's mind saying, "A fourth one?"

While the 37-year-old didn't give him a yes or no, she did respond, joking, "I think William might be slightly worried."

That could be construed as a maybe ... at least on her part. But no matter what the real answer is, fans of the royal family will definitely see another baby in the family — and soon.

After all, Prince Harry and Meghan, Duchess of Sussex, are expecting their first child this spring.