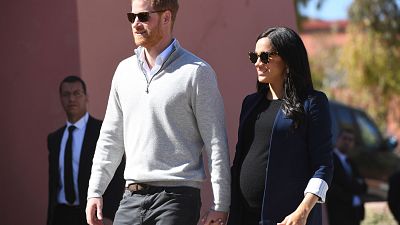 Prince Harry, Duke of Sussex, and Meghan, Duchess of Sussex, tour the Education For All boarding house on Feb. 24, 2019, in the town of Asni on the foothills of the High Atlas mountains.   -   Copyright  Fadel Senna AFP - Getty Images
By Farnoush Amiri  with NBC News Entertainment  •  Updated: 27/02/2019

Prince Harry has started his preparation for fatherhood as he made a very dad-like joke on an official trip to Morocco on Sunday, asking Meghan Markle if he is the father of the couple's upcoming baby.

The Duke and Duchess of Sussex were on a three-day visit to a school in the town of Asni to support girls' education when they were congratulated on their pregnancy.

As captured on BBC footage of the trip, Harry turned to Markle and responded with an informal joke: "What? You're pregnant?"

The duchess jokingly responded, "Surprise!" as she and other members of the charity, Education for All, laughed along.

But Harry wasn't done. He followed up with, "Is it mine?" which drew more laughter from Markle.

The couple, who married in May, are expecting their first child this spring.