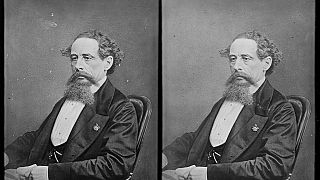 Literary giant Charles Dickens, acclaimed for depicting the plight of Britain's poor during the Victorian era, tried to banish his wife to a mental asylum so he could live with his 18-year-old mistress, new letters show.

Dickens's separation from wife Catherine in 1858 after more than two decades of marriage and ten children together is well-documented, as is his affair with 18-year-old actress Ellen Ternan. But accounts have until now focused on his side of the story which tended to depict him as a family man.

Victorian society frowned upon divorce and the process favoured men — it was easier for a man to be granted a divorce if his wife had cheated than for a woman to secure a divorce if her husband had committed adultery.

In a statement he released at the time to address the separation, Dickens disparaged his wife in writing: "I will remark of [my wife] that some peculiarity of her character has thrown all the children on someone else."

But the analysis of 98 letters, unearthed by John Bowen from the University of York’s Department of English and Related Literature, paints a different picture.

"What I discovered was both detailed and shocking, and to my knowledge, I was the first academic to transcribe and analyse these letters. It was a moment that made the hairs on the back of my neck stand up," Bowen said in a statement.

'She had outgrown his liking'

The letters reveal that Dickens attempted to have his wife incarcerated. They were written by Edward Dutton Cook, Catherine's next door neighbour in Camden, north London, where she lived after her separation from the famous novelist.

They provide detailed information about Dickens, Catherine and Ternan which Catherine recounted to her neighbour as she was dying from cancer, 20 years after her separation from her husband.

The crucial revelation comes in a letter from January 1879 — Catherine died in November of the same year— in which Cook writes: "He discovered at last that she had outgrown his liking. She had borne ten children and lost many of her good looks, was growing old in fact. He even tried to shut her up in a lunatic asylum, poor thing! Bud bad as the law is in regard to proof of insanity he could not quite wrest it to his purpose."

The doctor who stood up to Dickens is believed to be Thomas Harrington Tuke, superintendent of Manor House Asylum in Chiswick between 1849 and 1888.

Tuke and Dickens had, at one point, exchanged letters with Tuke even attending the christening of Dickens's son. But the relationship had cooled by 1864 with Dickens describing Tuke in letters as "wretched Being" and a "Medical Donkey."

“Biographers and scholars have known for years how badly Dickens behaved at this time, but it now seems that he even tried to bend the law to place his wife and the mother of his children in a lunatic asylum, despite her evident sanity,” Bowen said.

“Reading the material was quite difficult to be honest. Dickens is a literary great who I have studied and admired for many years but some of the letters made very uncomfortable reading.

“In some ways it is a ‘me too’ story about the power of elite men to coerce women. It is also a gaslighting story, manipulating someone into doubting their own sanity. And it is also a story about professionals standing up against the rich and powerful,” he added.

Long-lost Charles Dickens portrait back on show in London