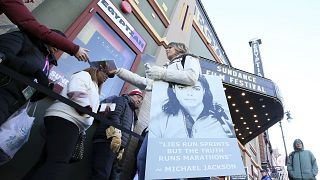 Catherine Van Tighem who drove from Calgary, Canada hands out pamphlets in support of Michael Jackson outside of the premiere of the "Leaving Neverland" Michael Jackson documentary film at the Egyptian Theatre on Main Street during the 2019 Sundance Film   -   Copyright  Danny Moloshok Invision/AP
By Daniel Arkin and Andrew Blankstein  with NBC News Entertainment  •  Updated: 22/02/2019

Michael Jackson's estate filed a $100 million lawsuit against HBO on Thursday over an upcoming documentary in which two men accuse the late pop superstar of sexually molesting them when they were children.

The lawsuit filed in Los Angeles Superior Court alleges that by co-producing and airing the documentary, "Leaving Neverland," the cable giant is breaking a 1992 contract for televising a concert in which it agreed not to "disparage" the singer, who died in 2009.

Jackson, who long professed his innocence, was acquitted of child molestation charges in 2005.

"HBO breached its agreement not to disparage Michael Jackson by producing and selling to the public a one-sided marathon of unvetted propaganda to shamelessly exploit an innocent man no longer here to defend him," said Howard Weitzman, an attorney for the estate.

HBO did not immediately respond to a request for comment. The channel has repeatedly defended the documentary, urging viewers to "reserve judgement until they see the film."

"Leaving Neverland" centers on two men — Wade Robson and James Safechuck — who claim they were befriended and then physically abused by Jackson. Robson and Safechuck came forward with their allegations following Jackson's death, after previously denying that the singer had abused them.

Robson testified in 2005 that Jackson had never sexually molested him. He filed a civil lawsuit in 2013 claiming that Jackson had abused him from the time he was 7 until he was 14. Safechuck filed a similar civil suit against the estate in 2014. Vince Finaldi, an attorney representing both men, has told NBC News his clients' suits were tossed due to the statute of limitations, not the credibility of their claims.

This is a breaking news story. Refresh for updates.