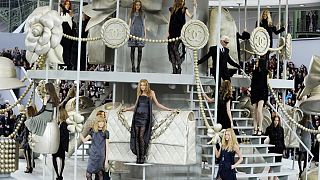 The fashion industry is mourning the loss of one of its most iconic and prolific designers. Karl Lagerfeld, Chanel creative director, passed away on February 19th 2019 in Paris. He was 85 years old – and so was (approximately) his career.

The longest lasting fashion designer ever, who had contracts with both Chanel and Fendi, passed away at the hospital in the morning after rushing to the ER the night before, reports French magazine Paris Match. Last January, he had failed to attend his own Couture show, a first for the German designer. Spokespersons of Chanel had then declared he was “too tired” to greet the show’s audience. The “Kaiser” had been creative director of Chanel since 1983 and Fendi since 1965, both brands with which he had signed lifelong contracts.

The avant-gardiste headhunter has undoubtedly contributed to the creation of contemporary fashion and pop culture: he’s responsible for the emergence of the Supermodels Era with muses Claudia Schiffer and Linda Evangelista. He’s also accountable for the advent of diversity in fashion and on runways with top model Naomi Campbell who thanked him with a few words on instagram: “THANK YOU !!! For taking the chance on 16 year old girl from South London and opening my eyes”. Furthermore, Karl Lagerfeld has helped maintaining and emphasising the myth of “ La Parisienne” embodied by icon Inès de la Fressange.

Mostly he had an eye for all sorts of arts, graphical, photographical, musical and scenographic: it goes without saying that his runways were the most spectacular. Four times a year, Lagerfeld would transform the Grand Palais in a way only he knew how. He would stage protests, create a supermarket, a casino, an airport, fly a rocket, make models climb giant purses or walk around an enormous tweed jacket. He revolutionized Chanel, fashion and luxury in every way.

He knew more than anyone the importance of symbolism and romance, always translated in his campaigns and collaborations with other artists: Jean-Paul Goude, Vanessa Paradis, Baz Luhrmann.

Evidently, the world of arts and fashion was shattered by his passing, to say the least. Celebrities and professionals of the industry posted multiple homages on social media, such as supermodel Linda Evangelista, one of Karl’s most legendary muses who wrote a few words: “? Karl... Great love of my life?” and designer Donatella Versace: “Karl your genius touched the lives of so many, especially Gianni and I. We will never forget your incredible talent and endless inspiration. We were always learning from you.”