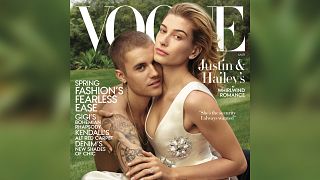 Justin Bieber and Hailey Baldwin on the cover of Vogue   -  Copyright  Annie Leibovitz/Vogue
By Ree Hines  with TODAY Lifestyle  •  Updated: 08/02/2019

Justin and Hailey Bieber show off the look of love on the cover of Vogue, and it's as gorgeous and glamorous as fans of the duo might expect.

But inside the pages of the magazine's March issue, in between more stunning pics from photographer Annie Leibovitz, the 24-year-old singer and the 22-year-old model make it clear that their marriage isn't exactly picture-perfect.

It's real and it's raw, and as the newlyweds reveal in the interview, they went into it without blinders on — and without sex.

Yes, before saying "I do" to his bride, the "Love Yourself" hit maker took a personal vow of celibacy.

Justin confessed to Vogue that, a year prior to his marriage, he considered sex a vice that he had "a legitimate problem with." So before connecting with any woman that way again, he wanted to reconnect with God.

"He doesn't ask us not to have sex for him because he wants rules and stuff," Justin explained. "He's like, 'I'm trying to protect you from hurt and pain.' I think sex can cause a lot of pain. Sometimes people have sex because they don't feel good enough. Because they lack self-worth. Women do that, and guys do that. I wanted to rededicate myself to God in that way because I really felt it was better for the condition of my soul."

And that choice paid off.

"I believe that God blessed me with Hailey as a result," he continued. "There are perks. You get rewarded for good behavior."

But the ultimate rewards — like a lasting partnership — require ongoing work.

"The thing is, marriage is very hard," Hailey said. "That is the sentence you should lead with. It's really effing hard."

And the couple, who first met right here at TODAY about a decade ago, revealed that they've had a history of tricky times.

Years before the whirlwind romance that led to their courthouse wedding last September, they dated briefly — and it didn't end well.

"Negative things happened that we still need to talk about and work through," she told the publication of that time. "Fizzled would not be the right word — it was more like a very dramatic excommunication. There was a period where if I walked into a room, he would walk out."

But they've obviously come a long way since then, and rather than walking away from problems, they're now working on facing them head-on.

"Fighting is good," Justin insisted. "Doesn't the Bible talk about righteous anger? We don't want to lose each other. We don't want to say the wrong thing, and so we've been struggling with not expressing our emotions, which has been driving me absolutely crazy because I just need to express myself, and it's been really difficult to get her to say what she feels."

And his "baby boo," as he calls her, countered, "You'll get it out of me the next morning."

Those different approaches are part of the challenges they face, and they hope that by learning to work through them, they'll end up being the secret to their success.

"It's just that I'm fighting to do this the right way, to build a healthy relationship," Hailey said. "I want people to know that. We're coming from a really genuine place. But we're two young people who are learning as we go. I'm not going to sit here and lie and say it's all a magical fantasy. It's always going to be hard. It's a choice. You don't feel it every single day. You don't wake up every day saying, 'I'm absolutely so in love and you are perfect.' That's not what being married is."

Instead, it's about rising to the challenge of an imperfect, loving union.