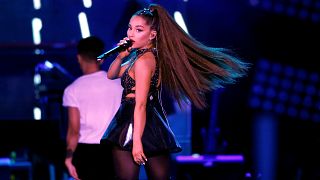 Ariana Grande slammed a Grammys producer's explanation for why she is not performing at the awards show on Sunday, saying he's "lying."

Grande tweeted a screenshot of producer Ken Ehrlich's interview with The Associated Press, in which the music awards show producer says the pop superstar chose not to perform at the Grammys on Sunday because "it was too late for her to pull something together for sure."

The singer responded in a series of tweets that: "i've kept my mouth shut but now you're lying about me. i can pull together a performance over night and you know that, Ken. it was when my creativity & self expression was stifled by you, that i decided not to attend."

The Recording Academy did not immediately respond to a request for comment NBC News.

Variety first reported that Grande would not perform or even attend the Grammys, citing a source who said she pulled out after a dispute over the choice of songs.

Grande, who is nominated for Grammys for best pop solo performance and best pop vocal album, said on Twitter that she offered producers three different songs for Sunday's show.

"it's about collaboration," the star continued. "it's about feeling supported. it's about art and honesty. not politics. not doing favors or playing games. it's just a game y'all.. and i'm sorry but that's not what music is to me."