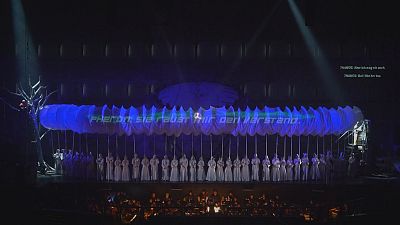 Visually stunning and eccentric, that is how the world’s famous Mozart festival (Mozartwoche) opened in Salzburg - for the first time under the direction of Rolando Villazón. One of the highlights, the new staging of Thamos, a forgotten work composed by Mozart when he was only 17 years old.

“The piece is about power and love. It's about a ruler. It talks about technology and a vision about the future. Especially in this production staged by La Fura dels Baus.”

“Artificial intelligence knows you better than you know yourself. Google, big data. Using your mobile phone and so on you become a new sort of slave. And if we look ahead it’ll probably be a bit like in Orwell’s film 1984.”

_“My favourite part is when you see Tharsis (Fatma Said, Soprano) and the stone. It’s as if she were a fossil and she detaches herself from it. Although she sings Pamina’s aria which is so beautiful, she sings it in Arabic with quarter tones so that I’m sure that if Mozart had heard it, if he had known that there’s music in quarter tones …
_

Artistic director and tenor Rolando Villazón chose for this year’s festival the theme "Mozart is alive". It is his heartfelt wish to thrill a big audience for the Austrian composer.

“For me Mozart is about everything: life, love, light and about the triumph of light.

“You can feel this group’s (La fura dels baus’) energy and all its inspiration. The inspiration from a staging which gets under your skin. As we experience all these emotions, it is like as if we’re shaken up through a lot of intelligence, art, a vision and poetry.”