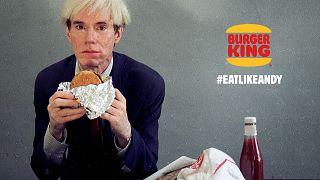 Did anyone else just watch Burger King's Super Bowl commercial waiting for a dramatic ending that never came? You're not alone.

The burger chain has become increasingly edgy in recent marketing campaigns, from advertising its delivery service with actual car accidents to throwing some pretty fierce jabs at its largest competitor, McDonald's. In January, the King even created a copycat Big Macand let customers use collectable McDonald's coins to pay for it.

But in the commercial that just aired during the fourth quarter of the Super Bowl, nothing (not even a flame-grilled burger) sizzled, blew up or did something to provoke a little laughterlike most big budget commercials during the game. In fact, aside from the crinkling of a fast food bag at the top of the spot and a little rustling of the burger's wrapper, there's barely any noise at all.

Instead, Burger King tried to one-up the competition by showing a different, more avant-garde side of its personality.

And it used one of America's most iconic artists, Andy Warhol, to do it.

Warhol, a legendary painter, sculptor and filmmaker, is widely considered to be one of the most preeminent figures in the pop art movement. Countless A-listers — and a popular famous can of soup — served as subjects for Warhol, from Marilyn Monroe to Blondie and Elvis Presley.

But he passed away in 1987. So what's the real deal with the new commercial?

Warhol once said, "What's great about this country is that America started the tradition where the richest consumers buy essentially the same things as the poorest."

This, Burger King announced, is what it wants customers to know: Whoppers are for everybody — the wealthy, the famous, the poor, the athletes and the artists.

The new commercial — which simply shows Warhol unwrapping a burger, adding a little ketchup and eating it — was actually 37 years in the making. Originally filmed by Swedish director Jorgen Leth in 1982 for a film "66 Scenes from America," the clip was meant to highlight different aspects of the modern American society.

One of its scenes included a 4-minute short of Warhol silently removing a Whopper from a (now vintage) Burger King bag and eating it. "The spot is meant to break through the traditional Super Bowl commercial break, filled with explosions, slapstick jokes and celebrities, with an almost silent, yet powerful work of art," Burger King said in press statement.

So, naturally, it was only a matter of time (nearly four decades, to be exact) until Burger King had to repurpose art it into an ad to continue the cycle of commercialism.

"What we love about Andy is what he represents as an art icon and his message about the democratization of art," said Marcelo Pascoa, head of global marketing for Burger King. "Our commercial is an invitation for everyone in America to 'Eat Like Andy'."

Before the Super Bowl, the company promoted an #EatLikeAndy Mystery Box deal, available through the delivery service DoorDash, during the week leading up to Feb. 2.

All the customers who ordered it are probably saying: "Ah, I finally get it!" right about now.

The Mystery Boxes were delivered over Super Bowl weekend and contained a vintage-style Burger King paper bag, a white wig resembling Warhol's signature haircut, one ketchup bottle and a DoorDash coupon for a free Whopper.