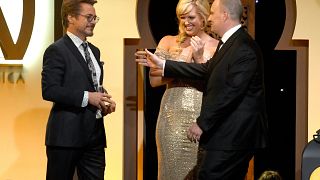 "Green Book," starring Mahershala Ali as a concert pianist and Viggo Mortensen as his bodyboard, also won the Best Motion Picture-Musical or Comedy at the 76th Golden Globe Awards on Jan. 6.

Fred Rogers documentary "Won't You Be My Neighbor" won the documentary award and Sony's "Spider-Man: Into the Spider-Verse" won the animated movie award. "Spider-Man: Into the Spider-Verse" topped "The Grinch," "Incredibles 2," "Isle of Dogs," and "Ralph Breaks the Internet." The last three PGA winners in animation, "Coco," "Zootopia," "Inside Out," have also won the Oscar.

The fifth season of "Last Week Tonight with John Oliver" repeated as the winner of the Live Entertainment and Talk category. The second season of "The Assassination of Gianni Versace: American Crime Story" took the David L. Wolper Award for limited series television.

Lauren Graham presented Amy Sherman-Palladino with the Norman Lear Award for Achievement in Television. Sherman-Palladino received a standing ovation and said, "I hope that I took away from Mr. Lear the ability to take care of my troupe, make the women feel empowered, and not make the men feel like schmucks, to make sure that whatever we do, we do it in great love."

Norman Lear, 96, presented Kenya Barris with the Visionary Award and promised, "You're going to see me for a couple more years."