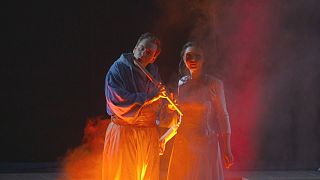 Mozart's enchanting fairytale The Magic Flute returns to the Staatsoper in Vienna for the festive season.

With heros and heroines, villains and comic characters, Mozart's final opera is one of his most beloved works.

French tenor Benjamin Bernheim plays prince Tamino. For him, The Magic Flute is a coming-of-age tale.

"It is a very tender way of looking at passing from one stage of someone's life to another. Whether it's Papageno, Tamino, Pamina; they all learn something.

"There are some things in The Magic Flute which are really quite brutal - racism and sexism are very, very present.

"In all Mozart's operas there are problems. And, at the end of the opera, there is forgiveness, unions between people, between characters. The Magic Flute is timeless and I think will remain so for 100 or 200 years."

Tamino is persuaded to embark on a quest to rescue the kidnapped Pamina, after he falls in love with her picture. As Bernheim explains, his aria 'Dies Bildnis is bezaubernd schon' (This image is enchantingly beautiful) says it all:

"Tamino's aria is quite distinctive, because of the social media networks of today. The three women bring Tamino a photo and he instantly falls in love. It's as though he's on Facebook or Instagram - my god: LIKE.

"Everything explodes inside him. His desire - whether's it's his sexual desire, his sensual desire, his desire to meet her, to talk, to have a connection with this person. Suddenly, everything changes for him. For me, it's about the passage to adulthood, the passage to responsibilities - 'I want something in my life, I want to do something, and I'm going in that direction'."

Moldovan soprano Valentina Naforniţa plays the long-suffering Pamina - imprisoned and then devastated when Tamino appears to ignore her.

"She has nothing to do but later on to kill herself and before that she sings this beautiful, angelic, heartbreaking aria; Ach, ich fuhls."

Fischer tells us how Mozart invented a totally new musical style in the final year of his life:

"The Magic Flute has one third of the notes of Figaro and Don Giovanni ... after Don Giovanni which was the greatest opera ever and everybody thought you can't find anything new, Mozart started in his last year a very new style, he needed much less to express feelings.

"What other miracles would he have composed, if he would have lived another 3 or 4 months?"