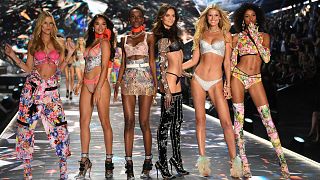 From a million-dollar bra to a beloved Angel's runway farewell, the night had no shortage of showstopping moments. There were even a few new faces on hand, including Winnie Harlow, the inspiring "America's Next Top Model" contestant with vitiligo.

Even so, many critics — like body-image activist Ashley Graham — say the brand still has a long way to go when it comes to representing a diverse range of nationalities and body types. As an increasing number of lingerie brands (like Rihanna's Fenty line) begin to embrace bodies of all shapes and sizes, Victoria's Secret has often been criticized for lagging behind in this area.

In a recent interview with Vogue, Ed Razek, chief marketing officer of L Brands, Victoria's Secret parent company, said the brand continuously evaluates the way they market their products. At the end of the day, though, he said Victoria's Secret still needs to stay true to their core customer base.

"I don't think we can be all things to all customers. It is a specialty business; it isn't a department store," Razek said.

The model joined sister Bella for the show, and ushered in the holiday season with some pretty, sexy plaid.

After a minor fall at the Michael Kors show during fashion week this September, Bella Hadid made a triumphant return to the VS runway, complete with brilliant blue wings.

It was a special night for the gorgeous model who has vitiligo. Harlow made her VS runway debut, and totally rocked it.

The supermodel showed off her star power — quite literally — in some supersultry black lingerie.

The 30-year-old got a pretty sweet birthday gift this year: She modelled the 2018 Dream Angels fantasy bra — you know, the one that's worth $1 million — the night after she bid adieu to her twenties.

At the age of 37, the model hung up her Angel wings last night after 20 successful years with the brand.

Phillips definitely embodied this year's "I am me" theme with her signature flair and confidence.

The mother of two made her return to the runway after giving birth to her second child this June. In other words, she's a supermodel and a superhero!

Sexy lingerie was on display all night long, but psychedelic prints were also on display.

The singer escorted models down the runway while performing in a sexy getup of her own.

The singer showed off her toned physique and her impressive set of pipes while performing last night.

In a nod to Victoria's Secret's sister brand, the singer rocked an all-pink ensemble.