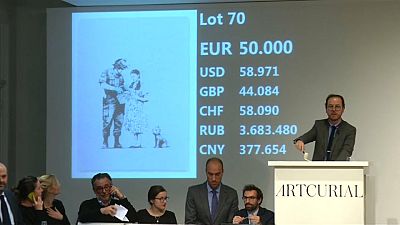 Works of the famous street artist, Banksy got under the hammer in Paris.

No work was shredded, as was the case last month at Sotheby's with the "Girl with Balloon" which was already sold for €1.17 million.

This time, all the pieces were sold much higher than estimated, at 2 to 3 times more.

The most expensive one in Paris, "Stop and Search" sold for €50,000 to a telephone bidder, an international collector, according to Artcurial.

The buyer will pay a final price of €65,000 with fees – double its pre-auction estimate according to Artcurial.

And the least costly one, "Queen Vic" went for €9,000, that's €11,700 with fees and still four times its pre-auction estimate according to the auction house.