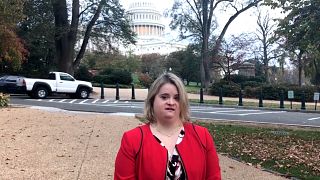 Kayla McKeon   -   Copyright  Courtesy of the National Down Syndrome Society
By Meghan Holohan  with TODAY Health and Wellness  •  Updated: 25/10/2018

Several years ago, Kayla McKeon was at a church festival with her parents when she bumped into John Katko, who was campaigning to be the congressman for New York's 24th district. The two had met before at a baseball game so he handed Kayla his card and she slipped him one of her cards that simply said, "motivational speaker." He made her a promise that she would have a job with him if he won.

This offer was a dream of Kayla's, who has Down syndrome. She always wanted to work in an office and when Katko won, she started an internship with him.

Little did she know that internship would be the start of a career that led her to being the first lobbyist with Down syndrome in Washington, D.C.

"I'm not surprised," her mom, Patti McKeon, told TODAY. "Kayla was never afraid. She didn't care who she talked to. She would say 'Everyone put their pants on the same.'"

McKeon said Kayla has always been determined. She wanted to drive and passed her driving test after five tries. Each week, Kayla reads a new book. This focus has served Kayla, 30, well during the past year as she works as the grassroots manager at the National Down Syndrome Society (NDSS).

While she lived in Washington, D.C., for about five months, she recently moved back to upstate New York because she missed her parents. But she visits Capitol Hill as needed, attends conferences and speaking engagements all while working toward her associate degree at a local community college.

"Being an advocate comes naturally to me and I balance it very, very well," Kayla told TODAY. "As a lobbyist, I feel like I am making history right here, right now. I'm getting priorities put in order to enact laws."

Much of Kayla's work involves making sure that differently abled people are treated fairly. Her first success came in December when a bill passed that allowed people with disabilities to save more money. In the past, an individual's savings could disqualify them from receiving Medicaid benefits.

"There needs to be a meaningful employment act," Kayla said. "We want to make it minimum wage and above."

It's important to Kayla that her voice is heard in Congress — and across the country.

"It is always imperative that all individuals with Down syndrome speak up," she said. "I don't want someone to speak for me when I want to speak for myself. I have my own message. My friends have their own."

When Sara Hart Weir, CEO and president for NDSS, met Kayla at agency events, she knew that Kayla would make an excellent lobbyist.

"Kayla is quick on her feet. She is dynamic. She is passionate about the issues she believes in, and most importantly, she builds relationships," Hart Weir told TODAY.

And, having Kayla as part of the team helps the organization fulfill part of its mission.

For Kayla, being a lobbyist helps her advocate for others who cannot.

"If you're not at the table, you're on the menu," she said. "If you just speak from the heart that's all that matters."