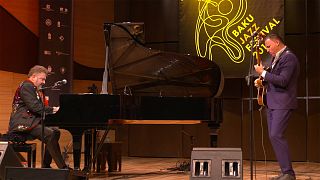 The Baku Jazz festival brought together a brilliant duo: Leonid Ptashka on piano and Gasan Bagirov on guitar. Ptashka, born in Baku and based in Israel is classically-trained. The multi-instrumentalist and conductor Bagirov comes from St Petersburg. From time to time the two perform together and all they want is to entertain.

"I absolutely don't want somebody from the audience to go home and think what did Ptashka or Bagirov want to say with their set in the concert? No I just want them to go home happy and the day after go to their usual routine job and say 'yeah that was a fantastic concert' and have good energy," said the extravagantly-garbed Ptashka. "I want a happy end and that's it, end of story."

Omar Lye-Fook jetted in from London.

"My great grand father was Chinese / Jamaican," he explains.

Lye-Fook had his breakthrough with his 1991 hit "There's Nothing Like This" which won him international fans including Stevie Wonder. He always is searching for new inspiration.

"I get bored with doing the same thing, I always like to experiment, Iike to do different things, I like to go against the grain as well because there is a lot of same stuff out there, same music with people wanting, trying to sound like other people. I always wanted to sound like myself," he says.

Omar Lye-Fook started playing in his early childhood - his father was a session musician in the 1960s and 70s and used to play with the Rolling Stones and jammed with Jimi Hendrix. He made his debut with soul / jazz in the 80s. Today, Omar is inspired by many music genres like soul-funk or hip-hop, Caribbean sounds and even zouk music from Guadeloupe, to forge his own sound.

Young Azeri singer Natavan Quliyeva was among the selected candidates to participate in the international music competition in Baku.

"I love to sing onstage, it's my favorite thing to do and I dreamt about it since my childhood so, here I am," she says, laughing.

There are various categories, and the goal is to scout new talents. Among the jury members - the festival’s artistic director, Rain Sultanov, himself an excellent saxophone player and Vadim Abramov, a musician from Baku living in Wiesbaden in Germany. They explained what is essential for a jazz musician to be good on stage.

"Well, Improvisation and the feeling for improvisation is very important," says Sultanov.

"Of course charisma is very important but also every musician has to see their musical possibilities and carefully find the repertoire which suits them and of course, they have to be professional," insists Abramov.

Always the most exciting moments in this festival are the jam sessions, after the main concerts, when different musicians who meet during the festival improvise together.

Jazz has been played in Azerbaijan since the early 20th century. During the Soviet era, Baku was one of three cities known for jazz, along with Saint Petersburg and Riga.

"Azerbaijan has a very long tradition and rich jazz history. Therefore, I can say, today Baku is the regional epicenter of the art of jazz music and the place where jazz develops," says the festival's Director, Leyla Efendiyeva.

Ptashka and Bagirov whip up a storm onstage, and Ptashka is touring in the USA right now.

"With around 20 concerts with musicians from all over the world, jam sessions, workshops, master classes and an international music competition for young talents, this festival explores all the colors and layers of Jazz," reports euronews' Culture Editor, Wolfgang Spindler.